Watch a video of the discussion here.

What does it mean to be human in the digital age? The ongoing convergence between science fiction and real-life technological advances makes it easy to imagine ‘the digital age’ as an era of conflict between human and artificial intelligences: of new technology as an alien tool to be managed and contained. Yet if we see the development of writing and the invention of printed books – both revolutionary technologies in their day – as adding to, rather than diminishing, the richness of human experience, discussions of the digital also have to move beyond simple oppositions of human emotions and sensations versus efficient and uncaring machines. On Thursday night, four speakers came together to think about what happens when the two overlap – and what might happen in the future. As a commenter on Twitter pointed out, the picture of two hands touching which appears on posters for this event, run by TORCH, might look at first glance like an oppositional encounter between human and machine. But, looked at another way, both the hands “are human, media(ted)”: technology and human self-expression seamlessly combined and promising to spark new forms of life.

Introduced and chaired by Dame Lynne Brindley, the Master of Pembroke College and former Chief Executive of the British Library, and kicking off the TORCH Headline Series Humanities and the Digital Age, the discussion touched on examples of digitalization in libraries, museums, and theatres; its shaping of vast global communities, and its reshaping of the most intimate processes of the human mind. During and after the event, a lively Twitter debate around the hashtag #HumDigAge (including both viewers inside the lecture theatre and those watching a global livestream) provided its own evidence for the potential of digital technology to mediate thoughtful communication.

The first three speakers explored issues of memory: the internet’s almost infinite but indiscriminate capacity to store information. This has complex effects on our sense of connection to history, art, and even to our own lives and communities. Dr Chris Fletcher, Keeper of Special Collections at the Bodleian Library, described how digitalization is revolutionizing the ways in which libraries and archives preserve documents of the past, and proposed some problems that these institutions may face in the future. Even as demand has grown for keyword scanning and remote access, he explained, the desire to experience texts in person continues and even increases; with a rise in physical visits to the Bodleian’s reading rooms, a flourishing academic field focusing on material culture, and a widespread – and, for buyers of rare books, commercially vital – fascination with historical items with qualities of “concentrated thingness”, such as handwritten manuscripts. Diane Lees also spoke from the perspective of museums and archives on the theme of public memory, sharing her experiences as Director-General of the Imperial War Museums, running public engagement projects in which “digital is being used to make humans feel more human”. In the most effective of these, crowdsourcing techniques have been used to build new forms of commemoration and emotional connection to the past.

Emma Smith countered this emphasis on humanity’s need to remember with a call for tactical forgetting.

At a certain point, she argued, unlimited memory become less an ability to remember, and more an inability to select and manage the overwhelming burden of data about the past: a condition she compared to a neurological condition called hyperthymestic syndrome and the plight of Jorge Luis Borges’ character ‘Funes the Memorious’. A Professor of Shakespeare Studies at Oxford, Smith focused her talk on the digital recording and archiving of live theatre performances. Nevertheless, her argument for the creative gaps and mistakes of human (as distinct from computer) memory has evident relevance to many other aspects of a society which increasingly captures, records, and catalogues online its every moment and emotion (while, as Smith noted, as individuals we find ourselves “outsourcing the archival part of the brain to the internet”). Indeed, the paradoxical and perhaps troubling state of being “recorded live”, she suggested, might be one answer to the question of what it means to be human in the current digital world.

If the themes of these speakers can be summed up as, respectively, preserving, remembering and forgetting, Tom Chatfield turned to the problem of (as in the title of one of his books) thriving in a digital age. Human-machine interactions force us to question what humanity is, and what the role of an individual human might be, within vast communities newly linked by shared technology and shared consciousness. But for humanity and the digital to coexist, he warned, we need to be clear about the differences between humans – who might want to think of themselves as rational and self-contained units, but are “actually intensely social, emotional, intractably embodied creatures” – and machines – which might appear to have agency, understanding and motivation, but can only carry out actions programmed by people. He challenged the audience – and the rest of the TORCH Humanities in the Digital Age series – to imagine: how can we describe humanity’s relationship to technology in all its richness and complexity, without anthropomorphism or sentimentality. And, as the digital develops in unpredictable, even unimaginable ways in the future, “what does a successful collaboration between humans and technology look like?”

All images courtesy of John Cairns.

Watch a video of the discussion here. 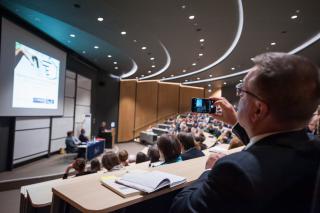