According to the promotional poster circulated by filmmaker and director Sam Spitz, ‘The Greens’ is a twenty-minute documentary that seeks to ‘raise questions about the dominant media narratives and policy changes that are reshaping urban America.’ It primarily follows Teddy Williams, a black American man and co-producer of the film, who used to live in one of Chicago’s infamous public housing projects, Cabrini Green. Today Cabrini Green is no longer the bustling, if also conflicted, neighborhood it once was. ‘The Greens’ follows Williams as he recounts what it was like to live in the neighborhood, a place often depicted as a hotbed of crime in the American media, but also called home by many families.

The clear strength of Spitz’s film for me was the space it allowed Williams and his friend, L.C. Harris Jr., also known as ‘Batman’, to speak about their lives. Whilst assuming the role of interviewer, Spitz for the most part stays off-camera. Instead we hear directly from Teddy and ‘Batman’ about their memories growing up in Cabrini Green and their sorrow at its recent decline and demolition by the Chicago Housing Authority. Their words are moving and poignant. ‘You can't take a gun, put it to my head and say, “This is a stick-up, give me your memories”’, Harris says at one point, reminiscing about his early life in the projects. Williams also effectively uses imagery to describe how it felt to watch his childhood home be dismantled, brick by brick: ‘It was like every time a building was tore down you lost a part of your body, like one of your members. Like your leg don’t work no more, then your other leg stop working…That’s how it started to look. Everything started to limp’.

My one regret about the film is that it did not include much of the social and political context behind Cabrini Green’s destruction. In his discussion after the screening, Spitz elaborated the specifics of Chicago’s Housing Authority decision to redevelop the area into ‘mixed-income housing’, in the process forcing thousands of low-income families from their homes. This is a trend happening all over America; it is commonly known as gentrification and disproportionately affects the nation’s historically black communities. ‘The Greens’ does important work placing center-stage several victims of gentrification: Teddy, ‘Batman’ and more. Still, I also would have found it helpful to learn more during the film – not only in the talk afterwards – about the events behind Chicago’s unique expression of so-called ‘urban renewal’.

It was a great privilege having both the filmmaker and the main interviewee on the film available for a discussion after the screening. Spitz joined the ‘Race and Resistance’ network in the Seminar Room in the New Humanities Building, while Williams Skyped the group all the way from Chicago. This, for me, was a highlight of the ‘Race and Resistance’ event. Both were eloquent, informed, and above all passionate about their project raising awareness about the plight of Cabrini Green. Again, Spitz spoke usefully about the politics behind to the demolition of public housing areas like Cabrini Green, whilst Williams talked at greater length about his own personal experiences and the problems facing the wider urban community.

The demolition of Cabrini Green, for many, has meant a life plagued by further hardship and personal struggle. According to Williams, most former residents from Cabrini Green have been relocated to neighborhoods in the outskirts of Chicago. This means that their children now attend underfunded and underperforming schools and that parents and providers must travel long distances by train to reach their places of employment – places they could easily access while resident in Cabrini Green. Whilst some social programs and organizations of community activism are starting to take shape, real solutions to these problems have yet to be developed. In their Q&A with the ‘Race and Resistance’ group, Spitz and Williams painted a vivid picture of how the needs of some of America’s most vulnerable citizens have been put second to corporate interests.

‘Batman,’ who is featured on the film, is a former gang member and drug dealer now tragically suffering Lou Gehrig’s, a degenerative neurological condition. As Spitz’s documentary portrays, Cabrini Green was by no means perfect, but for many of Chicago’s citizens, it was where they spent some of the happiest days. ‘I wish I could come back here and continue to be a success in life’, Williams says at one point in the film, wandering a derelict alleyway. In destroying some of Chicago’s urban buildings, city policymakers also lay waste to the lives of those they sheltered. This is a story of rights and belonging that deserves to be told, one that ‘The Greens’ is well on its way to powerfully articulating. 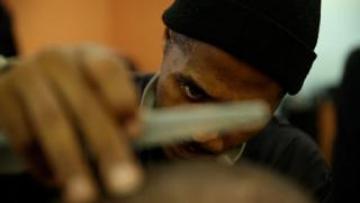