SciPo is now in its fourth year, and continues to offer lively and inspiring debate on the frontier between science and scientists on the one hand and poets and poetry on the other.

The line-up on the 8th June this year comprised Adam Horovitz, Frances Leviston and Michael Symmons Roberts. The plenary session, chaired by Sarah Watkinson, explored the “magic of what’s there” at the interface between scientific method and poetic practice, each drawing on their particular experiences: Adam’s residency with the Pasture-based Livestock Association and his resulting collection The Soil Never Sleeps”; Frances’ commission from the Piezoelectric Transduction Memory, Bio Nano Consulting and Poet in the City collaboration in which she explored poetry as an “electrical material” in a collection of five poems entitled, Emily’s Electrical Absence; and Michael’s engagement with the Mapping of the Human Genome project embodied in his collection Corpus.

Each poet explored the nature of their collaboration and what it means to properly engage with science beyond a superficial exploitation of scientific vocabulary or translation of scientific concepts into a creative medium. One of the areas of overlap prominent in this year’s discussion was the use of metaphor – in science as an almost accidental means to explain new concepts not previously articulated, and in poetry as a means of interrogating and intersecting with scientific logic in order to illuminate a new perspective. Michael’s poem Mapping the Genome uses the idea of driving on a motorway through the landscape created by the metaphor of mapping of the human genome; Frances used the work of Emily Dickinson with its highly condensed yet profound metaphoric conceits as a means to probe the development of new IT processing technologies – the world beyond the silicon chip; Adam’s work emphasised the fundamental importance of practical engagement – being on the farm and taking part in its daily work, learning about the world of soils and pasture and its use and management, in order to be able to write out of the experience on to the page.

The discussion was, as always, wide-ranging and inspirational. The project has evolved from an initially tentative exploration of two separate worlds to have at its heart the wonderful blurry between-ness that evolves out of two disciplines that both stretch language and logic ever further in order to convey the wonderful mystery of scientific and poetic discovery.

The chance to ground the discussion in the work of each of the guest poets, and seeing it taking on new life through the poetry competition winners is always a welcome part of the day.

The SciPo project, founded by Jenny Lewis and Sarah Watkinson, and this year organised by Sarah Watkinson and Elsa Hammond, St Hilda’s Lecturer in Romantics, continues to probe new territory: this year, as a result of extra funding from TORCH (Oxford University’s Research Centre in the Humanities), it has extended into a series of poetry writing workshops in association with research at Wytham Woods (where Sarah is writer in residence this year), The Botanic Gardens and The University’s Natural History Museum, as well as a seminar series organised by Nicola Thomas, Lecturer in German at Queens.

Thanks are due to the able organisational team, the welcoming environment of St Hilda’s, and to Sarah for her excellent chairmanship of the discussion.

Dr Romola Parish was an academic specialising in environmental change. She now practices as a planning lawyer in London. In 2017 she was poet in residence at Oxfordshire County Council’s Historic Landscape Classification Map project, resulting in a collection In Polygonia. She is also an artist and a collection of images of her work and poetry Crying in the Silicon Wilderness accompanies an exhibition of her work. Her poetry has been published in a number of journals, including the Irish Literary Review and the Cardiff Review, and has won, been placed and shortlisted in a number of competitions. 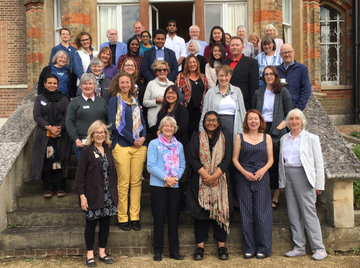