Breaking Free is an online, collaborative dance symposium involving members and associates of Café Reason Butoh Dance Theatre and a DPhil researcher from the University. Butoh, an expressionist dance form originating in 1950s Japan, involves ‘the formation of a question inside the body’. As a dancer tries to answer it, the question becomes deeper and more complicated, leading to more dancing, questioning, and searching. It is a useful medium to interrogate many of the questions faced by the humanities, including how we perceive and relate to our bodies.

Running over the course of several months, the artists collaborating on this project will be eliciting, producing, and discussing their responses to four different themes.

From the creative responses to each theme we will produce a video-collage performance that will be available to view online.

This initial online performance is intended to be starting points towards a larger-scale project at a later date.

I had 2 areas I wanted to explore.

Looking at the unpermitted body. That is, finding ways to explore what we are not permitted to be because of our gender. Parts of ourselves that are silenced and pushed into the margins of awareness. I’m particularly interested in looking at how this is for men – the unacknowledged price they pay for their privilege. Especially when the privilege is also not acknowledged. I notice that over the years since the feminist movement started women have done so much work on defining and questioning what it is to be a woman, we’ve challenged, explored, fought each other, and are still doing so in many ways, for example in the area of transgender women. But what have men been doing? Not a lot as far as I can see. We hear about men feeling they’ve lost their role in life because of Women’s Lib, which implies that men can only see themselves in relation to women. Women moved the goalposts and men are lost. Or they’re on the defensive about being accused of having privilege, but when they start playing the victim and going on about how they’ve had it hard too, you wonder what they’re defending.  What I notice is that we aren’t that challenged now by the idea of a woman astronaut or doctor or lorry driver, but we still find it hard to get our heads around a man staying at home to bring up the kids or a man wearing a dress. Do men know how constrained their traditional role is? Maybe it’s because I don’t spend a lot of time with men, but I don’t sense they are really questioning this except in private or to moan on about how men get abused by women too. Where are the men’s consciousness raising groups like we all had in the 70’s? Individual men do question but how far does it go?

But at present we are an all-female group. And I’m struggling to find any way to work on this in movement.  I envisaged this as a butoh walk with various visualisations: shrinking in, making oneself invisible, being both visible and invisible, being afraid of the people around you but not allowing yourself to show the fear (not sure if that’s even possible but I feel it’s actually what goes on in reality all the time. We’re afraid but can’t let anyone see our fear, so we have to look as if we really want to be what we are.) I feel that this is a rich ground to explore but we can only look through the lens of our own experience as women. Even though women are historically the ones who have been and are being silenced and marginalized,  my mature realization - or intuition – is that men have done this to us because they are silencing and marginalizing so much of themselves that they can’t allow us to go free, when they are still paying such a high price in terms of their own humanity.

If we were moving this I’d then go to the opposite, of free, wide expansive movements. Then have one side of the room do one type of movement and the other side do the opposite etc etc. Which would make interesting choreography. But if we do it in an all-women group it will only be about the story of women’s being silenced and   marginalized and it’s way more interesting to get men to look at what they are doing to themselves as well.

Is this all a bit too ‘head’? Does any of this resonate at all with you? You all live with men and so probably see things very differently to me.

I would give each one of you a large sheet of paper (some of you have already seen these from other times) which is your gender. You’ve just arrived here on this planet, or been born, and have no preconceptions about what your gender means. How did you come to understand your gender? Use the blank sheet to remember how you came to build your own sense of femininity or masculinity. Think of gender as a spectrum with male at one end and female at the other. Where on the spectrum do you see yourself? How did you arrive there? Is it a good place or a bad one?

I’d see this taking perhaps 20- 30 minutes with 10 minutes for processing after.

I’d like to take some of these sheets of paper to each of you at your addresses. I’ll give you a few sheets each so you can try it more than once. Do anything you like with the paper. Make it into something – or many things; destroy it; clothe yourself in it; make it take you somewhere you never went in reality; whatever. Make it a journey, through childhood, adolescence and adulthood.

I’d normally ask people to process into a different medium, write or draw. Maybe write a story as if you are writing about someone else. But you could just talk if you’d rather.

As this stage of this project is about exploring how we can create a workshop with real bodies at a later stage, why not try out both parts of this section, including the first part which I’m not sure is workable. Then we can get back with each other and compare experiences and get an idea of what works and what doesn’t. 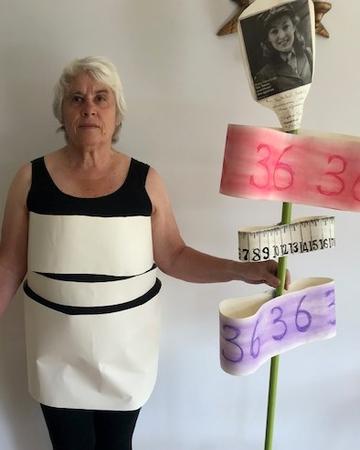