Self-Representation in Late Antiquity and Byzantium

The 23rd International Graduate Conference of the Oxford University Byzantine Society was held on 26th-28th February 2021, and for the first time in the Society’s history it took place entirely online. This allowed for not only thirty-six graduate speakers, but also many participants from around the world to engage with the theme of the conference, Self-Representation in Late Antiquity and Byzantium. We also had the pleasure to host two keynote speakers, Professors Cecily Hilsdale (McGill University) and Stratis Papaioannou (University of Crete).

Self-representation is a process by which historical actors – individuals, communities and institutions – fashioned and presented a complex image of themselves through various media. The conference was intended as a means through which to explore the various results of this process – for example architecture, material culture, literary works – which filled the Late Antique and Byzantine world with voices and images trying to present and represent an idea of self.

The participants certainly succeeded in capturing the vast reach of our field, while closely engaging with the theme. Case studies ranged from Late Antique Gaul to fourteenth-century Kyrgyzstan, highlighting the variety of interests that make Late Antique and Byzantine Studies a truly global discipline.

Although previous scholarship has hitherto treated this theme mainly from a literary point of view, our conference demonstrated its value as an interdisciplinary theoretical framework. Throughout the three days of the conference, the speakers pushed the boundaries of this process beyond its usual borders and used it to explore issues of self-representation in visual art, clothing, nicknaming, and even holiday legislation.

Despite being able to narrowly avoid the effects of the pandemic in 2020, this year’s conference had to be held entirely online. This was possible thanks to the generosity of the AHRC-TORCH Graduate Fund, which enabled our Society to host the event via Zoom. The organisers are also thankful for the support of student volunteers who participated in the selection of the abstracts and chaired sessions, ensuring that no technological disruption took place.

Thanks to the new format, the conference was attended by an unprecedented number of speakers and attendees, with more than 310 virtual tickets sold. The online feedback forms unanimously praised the organisation of the conference; many also underlined that, although this was the twenty-third iteration of our conference, this year was the first time they were able to attend the event. Accordingly, the 2022 conference is being planned as a hybrid event.

As in previous years, we intend to publish selected proceedings from the conference in an edited volume, thus contributing to ongoing debates on self-representation as a methodological tool. Furthermore, in what truly was the spirit of this conference, we hope to maintain the scholarly connections and exchanges of ideas that were fostered throughout the event.

The conference was organised by Lorenzo Saccon, Alberto Ravani and James Cogbill, with support from the Oxford Centre for Byzantine Research, the Oxford Centre for Late Antiquity, Oxford Medieval Studies, the Arts and Humanities Research Council, The Oxford Research Centre in the Humanities (TORCH), Oxford’s Faculty of History and the Society for the Promotion of Byzantine Studies. 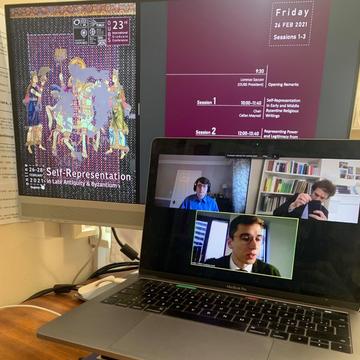