Ava DuVernay’s Selma premiered this weekend in England at a critical time of racial unrest in American history. Though half a century after the march on Washington, the Voting Rights Act, and the events of Selma itself, this past year witnessed protests sparking across the States over acts of police violence against unarmed black men. Indeed, the resemblance between images of recent riots in Ferguson, Missouri bore an uncanny resemblance to the shots of protestors streaming through Selma amidst police gas – their fear and anger visceral.

Dramatising the struggle for the black vote, one of the film’s strengths lay in fleshing out the diversity of parties and activist strategies involved in the Civil Rights movement, which was certainly no monolithic bloc. Tensions flared up between the Student Nonviolent Coordinating Committee and Southern Christian Leadership Conference, whom the former initially felt were infringing on their turf, when the latter selected Selma as the grounds to stage their nonviolent protests securing the vote. The history of disagreements between Malcolm X and King was also alluded to in an exchange between Coretta King and the Muslim minister and activist, despite their shared concerns over the fate of African-Americans in the States.

While Selma powerfully captures the glorious moments of Martin Luther King’s struggle with soaring rhetoric and swelling soundtrack, it also depicts the domestic strains that King’s work placed on his family life and the many sacrifices it entailed – both on him, as well as on those who supported him. Particularly moving was the scene focusing on the quiet grief of Cager Lee over the death of his grandson, Jimmie Lee Jackson, who was killed in a state trooper attack on a nonviolent night march. The film also tracked the involvement of white clergy, documenting the brutal murder of Reverend James Reeb, who travelled from Boston to march with King. These less heady, reflective moments balanced the dramatic action of the protests.

DuVernay has produced an artful portrait of a key moment in American history, a year punctuated by both despair and frustration, inspiring sacrifice and triumph. Though the overtly racist, flat portraits of Governor Wallace and the sneering registrar intent on preventing African-Americans from voting may seem as removed as the struggle for the vote itself, the reality of racism remains disturbingly relevant. King laments in the film that only two-percent of blacks vote in Selma despite making of fifty-percent of its population; today, Ferguson’s mayor and the majority of city council members and police force are white, despite African-Americans composing two-thirds of its population. We can receive the film as a challenging reflection – or  timely exhortation – that there is considerably more to be done before we arrive at King’s famous dream.

Stephanie Tam is Masters candidate in the Department of English Literature at the University of Oxford. 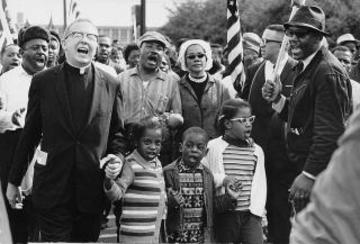