Negotiating one’s way through the avant-garde circles of early twentieth-century Europe was certainly no walk in the park for any woman, even if she were among the bevy of the so-called ‘New Women’ of the day – savvy, urbane, and iconoclastic enough to be finger-pointed as the very ‘cause of modernism whatever that is’ in a 1917 article in the New York Evening Sun. This, however, is what the British writer, artist, fashion and lampshade designer, Mina Loy, set out to do.

Whatever their mutual hostilities, key movements in the artistic vanguard had one thing – or one smell – in common: a pungent sexual machismo. Work one’s nostrils in vain – from the Futurists and the Vorticists to the Dadaists and the Surrealists – its stench did not let up. We find it in the virulent pamphleteering of Filippo Tommaso Marinetti and his call for the ‘contempt of women’; we find it in the various hallucinogenic femmes fatales and femmes enfants of André Breton, Philippe Soupault, and Louis Aragon; we find it in a comic prelude to rape in Wyndham Lewis (‘Your arms are like bananas!’); and we find it in the broken, ballooned, bodies of Hans Bellmer’s dolls. In short, it will not be unfair to say, the revolution in the arts remained redolent of a brand of masculine sexuality that, in seeking to épater le bourgeois (scandalise the middle-classes), would go so far as to écraser la femme (snuff out women).

Mina Loy’s stance toward these movements and their figureheads was inevitably one of irony. She fraternised and she flirted with the men of the avant-garde (to the point of marrying the Surrealist boxer Arthur Cravan). However, she kept her distance, and asserted her difference. Sexual emancipation remained under the rubric of the New Woman, but if she were to take it on, it would be articulated on her terms.

Writing of Mina Loy, the American poet Kenneth Rexroth notes, ‘As one reads of Mina Loy’s babies, one’s sphincters loosen. Her copulators stay copulated… Mina Loy, in her best-known work, dipped her pen in the glands of Bartholin, and wrote.’ Contractions and dilations, secretions and excretions, birth-pangs and wild bangs make up the form and matter of her writing. The archetypal woman-nature complex is appropriated and worked to her own ends. Among her ripostes to Marinetti’s depictions in his Futurist Manifesto of the subhuman woman one finds a poetic vignette of

With such rampant heterosexuality and obsession with ‘the natural’, the present reader might ask: what does such a straight woman (so incurably straight as to feature as the token straight woman in the all-lesbian cast of Djuna Barnes’ illustrated Ladies Almanack) have to do with anything queer? I’ll suggest a response through Loy’s novel, Insel, originally conceived in Paris in 1936, and published quite belatedly, and posthumously, more than half a century later in 1991. I’ll begin, however, with the claim that what the anti-essentialist and anti-identitarian underpinnings of queer theory enable us to see, is that the ‘straight person,’ as much as the ‘gay person,’ is essentially a construct, a theoretical fiction. To think queer is to think beyond these facile and restrictive categories.

‘Straightness’ and its activities are rehashed. If love were a dance, it could be said to be always already choreographed, its moves a repertoire of clichés. ‘Straight love’ is, as such, over-determined, in the sense that it repeats itself in formulas ‘Queerness,’ on the other hand, is underdetermined to the extent that its expression is open to constant renewal, requiring rearticulated forms. To bring it to a formula: Straights do love; Queers make love.

It is precisely in this creative aspect of making love when bodies no longer function formulaically that one may trace a certain utopian achievement in Mina Loy’s novel Insel. As it turns out, even the New Woman can grow old. Loy, attractive as a young woman, delighting in the bodily effusions of her earlier poetry, now ages into her novelistic avatar, the middle-aged Mrs. Jones. ‘Sex’ now gives way to its other, one of whose allegorical garbs in the novel is given, half-facetiously, as ‘black magic’. Intercourse, barred from genital expression, is transported to queer territory. Eros, as it were, finds her muse once more. This queer enjoyment, difficult to pin down since it eludes naming, is closely associated with the painter Insel; and much of Mrs. Jones’s approach to him is a mixture of enchantment and comic detective work. Her attempts to read him yield results from the mundane to the absurd: he is first a ‘Surrealist’, then said to be haunted by something ‘black-magicky’; he, in fact, in some kind of parody of ‘animal magnetism’, emits ‘Strahlen’ (rays); or perhaps he is simply on drugs. Most likely, however, his allure derives from his sexual relations with goddesses. Or so it seems to Mrs. Jones: ‘He seemed to be sodden with some ineffable satisfaction, as if emerged drenched from some luxuriance requiring little tangible for its consummation. I had to hold myself in check. My charmed curiosity wanted to cry, “From what enchanted bed of love have you so lately arisen? What astral Venus has just receded from your embrace?”

There is something hyperbolic or even camp in all of this. The portentous reach of the European avant-garde hits the flamboyant and the absurd, an effect Loy enhances through her strategic insertions of high-German, which, to English ears, strike a note of Teutonic overkill. Insel’s operatic poses range from Kafkaesque imitations, starvation stunts, playing dead (‘“I am to die,” he rejoiced. […] “Sterben,” he sighed in the voice of a weary archangel”’), and to rhapsodies over the sublime decrepitude of his body: ‘“I’m so ugly naked,” […] “and it frightens the women. I used to be so beautiful. Is it imaginable?” […] “All women are terrified of me”’.

Insel is indeed very ugly.  For Mrs. Jones he is, in the briefest terms, an ‘animate cadaver.’ But the question Loy’s novel tackles is: does love uncover another body – a queer body and a body of bliss that goes beyond the aesthetic conventions of youth and beauty? The allegorical antagonists here are sex – which the protagonists do not do – and black magic – with which they enchant each other. Whatever ‘love’ passes between this past-prime pair is certainly not named as such; and its enactment seems to involve mostly endless café-talk and long-walks during which the boundaries separating their bodies themselves seem to disappear, voiding all surrounding space, and drawing them into each other with an intensity that borders on the eschatological. The mundane and the revelatory are simultaneous. The result at times is delightfully absurd: Mrs. Jones, on more than one occasion, turns into a rubicund beefsteak under Insel’s arrested gaze; another episode of queer love-making seems to involve the painter plucking the loose lint off her attire with obsessive intensity. What I have considered under the banner ‘black magic’, it might be clear by now, is at work wherever the wings of Eros might take us, where mortal human bodies are redoubled beneath the aesthetic imagination, the sublimating gaze of the other, or perhaps even in the light of eternity. Loy’s writing remains wet; but, if steeped in Bartholin fluids, this prose also runs purple, immersing everyday life in transfigurative, if overwritten, visions. This is where Mrs. Jones and Insel meet:  ‘Projected effigies of Insel and myself insorcellated flotsam – never having left any land – never to arrive at any shore – static in an unsuspected magnitude of being alive in the “light of the eye” dilated to an all enclosing halo of unanalyzable insight, where wonder is its own revelation.’

‘Projected’ – thrown forth and redoubled – as images or ‘effigies’ against a kind of revelatory light, their bodies are relocated in a region of eternity, a place where some transfigurative ‘sorcery’ holds them suspended in a moment of transcendental encounter. All this in a café. Against the pop-Freudian conception of ‘sublimation’ as what one does when not having sex – having swapped the ‘thing itself’ for compensatory activities (like talking and painting) – Insel’s wager is that the ‘black magic’ of a sexuality unbound from its straitened praxis has more to say about love. It is, in short, queer. 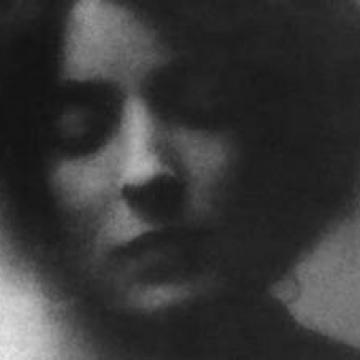