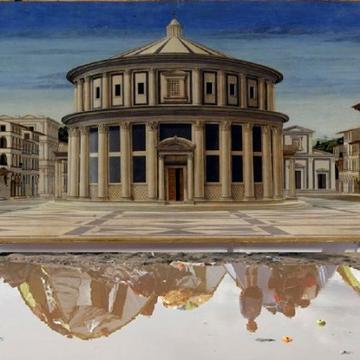 Storming Utopia is an intergenerational theatre project aimed at bringing some key sixteenth century texts on the idea of utopia and related notions of islands, migrants, cultures and both natural and political storms. The idea for the latest instalment of the production grew out of an existing partnership between the University of Oxford and Pegasus Theatre. In its first year, Storming Utopia resulted in a short play, performed in 2015, which tried to address some of the questions arising from the idea of Oxford as an island – Who does the island belong to? What does the island consist in? What counts as an island in the first place? Two years later, with the advent of recent political ruptures, most notably the outcome of the EU referendum and its consequences, even more urgent questions are added to this important list. Who should be let in to an island? Who decides? What is the relationship between island and continent?  It is with these questions fresh in our minds that we met for the first time on the evening of 12th January 2017 – a new set of ‘utopists’ compared to 2015, composed of university staff, working professionals, researchers, academics, and young people from two Oxford schools. This mix of people of different professions and ages (there is an almost sixty-year difference between the youngest and oldest member of the cast) meant we were not short of ideas and perspectives on the issues that we initially confronted on what Utopia is and what kinds of storms there are. But the fun really began when we were asked by the directors, Professor Wes Williams and Angharad Arnott Phillips, to enact some of the thoughts and responses that we had provided. In practice this meant creating storms using limited props (lamps, books and umbrellas), devising different scenarios of people asking to be included, let in, become part of something, forming ‘breathing’ islands, refugee camps, protests and mobs with only our bodies and our imaginations for resources. During the six weeks in which we met to talk, play and devise the building blocks of the script for the final production of Storming Utopia that took place on the evening of the 6th of April at the Pegasus, we grew to learn about one another and the various stories that swept us into the project in the first place. We discovered the story of Asefay, a member of our cast who was born in Ethiopia and moved to the Sudan to flee civil war before coming to Oxford, where he now lives and works. His story, told in his words, became one of the leading threads in our final performance, and allowed us to link some of the dominant discourse surrounding the referendum (for one, an open hostility towards immigrants and the ‘other’) with a real, flesh and blood individual who could relate his journey to the audience on a human level. Asefay’s story was interwoven with another key narrative, which explored the central relationship between two high school students and the development of their forbidden love against the background of Brexit, the rise of Trump and other political happenings going on around them. In all of this, we drew from the fertile well of a series of early modern writings, from More’s Utopia, to Shakespeare’s The Tempest and The Book of Sir Thomas More, and others, texts that are concerned with ‘nowheres’ as much as ‘somewheres’ and with ‘outsiders’ as much as ‘insiders’, and we were led to consider the relationships between these two sets of contested, divided (and often divisive) categories. The early modern texts, with all their intellectual baggage, were not so much the starting as natural stopping points in our journey through the mired waters of utopian thinking, harbours in which we would both find refuge from, and draw inspiration to tackle, the modern utopian questions the project raised. The texts naturally leant themselves to our story, offered their own responses to these questions, and always fuelled, rather than restricted, our creative process. This was embodied most vividly in a diachronic scene split between a sixteenth century ‘interview’ of Thomas More and pre-Brexit press conference involving Boris Johnson, in which questions levelled at one were answered in the language and ideas of the other, and vice versa. This not only showed the striking extent to which More’s words are relevant to today’s political happenings but also the fascinating ways in which political discourse returns again and again to the same questions, separated by the events, in this case, of hundreds of years.

At the end of our first performance, attended by members of the Oxford public in April, we held a short question and answer session which gave us an opportunity to reflect on our guiding motivations and aspirations as well as the process of creation behind the finished piece, as we prepare to take the show to the Cini Foundation on the island of San Giorgio Maggiore, Venice. Overlooking the open lagoon, at once vulnerable and enclosed, with its ubiquitous boats, themselves floating islets, and its watery canals, age-old witnesses to its rich history as the island of islands, Venice provides the ideal next step in the journey of Storming Utopia. Within the archipelago, the Cini Foundation is an especially apt host for the project, which aims to bridge sixteenth century ideas with the modern day – it is in the same spirit that the Cini Foundation works to preserve and promote Renaissance literature and culture in modern day Italy and beyond. The cast looks forward to bringing its island of noises, its books, stories and real and imagined characters to the Cini at the end of May, for the next instalment of this tempestuous experiment in practical utopianism.