On Saturday 29 November –  a beautiful late autumn afternoon – Merton College honoured one of its most significant alumni through a tribute event: ‘Stuart Hall: A Celebration’.  The eminent cultural theorist Professor Stuart Hall died in February of this year. Born in Jamaica in 1932, he moved to Britain in 1951 in order to study English at Oxford on a Rhodes Scholarship. He spent five or six years in Oxford and at Merton, completing his undergraduate degree and then beginning postgraduate research on Henry James, before moving on to London, Birmingham and the Open University.

The Merton event, held in the college’s elegant TS Eliot Theatre, was in three parts. First a panel of current Oxford academics spoke in turn of Hall’s lasting and varied legacy. Chaired by current Merton DPhil candidate Jason Allen (pictured here), who was himself born in Jamaica and is completing a thesis on Derek Walcott and Aimé Césaire, the panellists were Professor Elleke Boehmer, Professor Jane Garnett, and Professor Michael Keith. Jason Allen spoke first, describing his discovery that Hall had studied at Merton as a ‘poetic revelation’, and testifying to Hall’s continued relevance to ‘current immigrant postcolonials’, to the significance of his  ‘problematic relationship with Oxford’  and to his stance as an ‘anti-ivory-tower intellectual’. Elleke Boehmer then highlighted several key aspects of Hall’s thought, including that the ‘local’ is interesting and compelling, that it is possible to be both black and British, that analysis of ‘routes’ can yield more than a preoccupation with ‘roots’, and that  we need to think of empire as a continual crisis rather than as a past and finished event.

Through an account of Keith Piper’s exhibition, ‘Relocating the Remains’, and the work of InIVA at Rivington Place, Jane Garnett emphasized Hall’s insistence on historical particularization, and on the historical constructions manifested in the archive. Next, Michael Keith organized his words around Hall’s central idea of the ‘unfinished conversation’ or ‘unfinished argument’, paying tribute to his intellectual generosity, his commitment to collaborative scholarship, and his availability to ‘those on the ground who needed his help’.

The second part of the event was a screening of John Akomfrah’s moving documentary, The Stuart Hall Project (2013). Replete with Miles Davis soundtrack and unifying images of ships and the ocean, this stunning film manages to be an account of Hall’s life and contribution to intellectual and political history that is also an account of modernity and its ongoing dilemmas. Finally, following the opportunity to take stock over wine and cake, the true devotees (and there were several) were able to watch live streaming of the Stuart Hall Memorial event taking place at The Light in London’s Euston Road.

Towards the end of his film, Akomfrah included a quotation from Hall about the many ‘pathways’ that had made up his sense of self, and Hall included ‘Oxford’ and ‘English literature’ among these. Yet he has always spoken openly of the fact that his time at Oxford was formative in no small part because he never felt at home there. As he said in the Desert Island Discs recording of February 2000, from which Michael Keith played an unforgettable clip on Saturday, on his arrival in 1951 Oxford  had ‘looked like it was supposed to look’, but  ‘it didn’t quite feel like it was supposed to feel’. It was ‘a bit of a shock’. ‘Someone like me could not really be part of it’ Hall realised. ‘I would never feel it was my place’.

Such observations beg one obvious question: would Hall feel he could be ‘a part of Oxford’ had he arrived here aged 19 in 2014? As Dr Lloyd Pratt reminded us at the Race and Resistance Network seminar honouring Stuart Hall back in February, one critical imperative in his work is that we should always reflect on the politics of our own institutions. In light of student testimony at last summer’s ‘I too am Oxford’ campaign;  of the continuing under-representation of black and minority ethnic people at both student and faculty level; of the urgent and ongoing need to diversify the curriculum;  and of the difficulty that those who work in ‘non-white’ fields often encounter in gaining recognition for their research, it is clear that not nearly enough has changed since 1951. That too many people still feel that Oxford is not ‘their place’ is a reality that continues to have widespread intellectual, ethical and welfare implications.

Yet if Stuart Hall were in Oxford this very week, what would he think? On the day of the Merton event, a group of students organized a highly successful ‘Black Lives Matter’ demonstration, in solidarity with those protesting the death of Michael Brown in Ferguson, Missouri. The coming days see a host of debates on race and racism centred on the 50th anniversary Malcolm X’s speech at the Oxford Union, and on Professor Stephen Tuck’s (Director of TORCH) book; these  include a panel on ‘Seeking Racial Equality in Oxford, 1964 and 2014’.  At the end of the week, a conference on the ‘Global History of the Book’ features, among other highlights, a paper by Aaron Kamugisha on CLR James’s The Black Jacobins.  Last week Thomas Glave presented at the Kellogg College Creative Writing seminar series, and in sixth week Annette Gordon-Reed spoke of her work on Thomas Jefferson and Sally Hemings at the inaugural lecture of her Harmsworth Visiting Professorship.

Race at Oxford is certainly an unfinished conversation – unfinished not wholly in ways that Stuart Hall would approve. But the dialogue has at least, and at long last, properly begun.

Tessa Roynon is a Research Fellow in English at the Rothermere American Institute and (until March 2015) a Lecturer in English at Merton College. 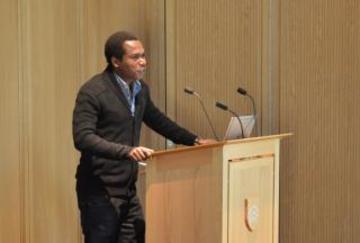