A figure surrounded by ambiguity, the sylph is one of the four elemental beings described by the Renaissance alchemist and astrologer, Paracelsus, in his treatise A Book on Nymphs, Sylphs, Pygmies, and Salamandres, and on the Other Spirits, published posthumously in 1566.

A century later, the sylph, alongside the other elemental beings (each corresponding to one of the Aristotelian elements – air, fire, water and earth), was introduced into French and subsequently European fiction by the Abbé de Villars. His Count of Cabala, Or Dialogs on the Secret Sciences (1670) saw three editions within a few months, eventually totalling twelve French editions (Sigerist 1996:215). Its popularity continued throughout the eighteenth century. Gradually, the sylph motif became extremely recurrent in European fiction, expanding into a variety of genres - plays, poems, novels and ballet.

Although the themes of works featuring sylph and sylphide characters vary significantly, libertine literature represents a substantial corpus of fiction employing the sylph motif. That is, a strand of eighteenth-century fiction which centred upon sexual relationships and transgression (in its many forms) and most importantly, on breaking down of boundaries and norms (both physical and moral). Canons of the genre include Choderlos de Laclos’ Dangerous Liaisons (1782), Claude Prosper Jolyot de Crébillon’s The Sofa: A Moral Tale (1742) and, at the extreme of the spectrum, several works by the Marquis de Sade.

According to Paracelsus, sylphs are both human-like and spirit-like in nature, but do not fully belonging to either realm (Paracelsus 1996:228). As such, they find themselves on the border between the world of men and that of immaterial creatures. The literary function of the sylph appears to be closely linked to the malleable property of its elemental body composed of the ‘most delicate particles of air’ (Villars 1987:13). Its supernatural powers like shapeshifting, flight, invisibility and ability to magically dispense rare gifts and refined pleasures make it a unique tool for the exploration of a greater diversity of characters, themes and motifs. For example, an ideal, tireless lover who can take on the shape of a music teacher, a handsome young valet, a live doll of perfect beauty or even of a favourite pet. As we see in this example, the sylph character acts as a platform for the exploration of sexual relationships of diverse natures and with figures with whom such ties are forbidden within the framework of a traditional seduction narrative.

The body of the sylph appear limitless and unconfined and is thus prone to perpetual transitiveness and indeterminacy and is therefore often found on the borders separating different physical, psychological or ideological categories. It is specifically the sylph’s shapelessness, granted by its atomised nature as well as its supernatural ability to shapeshift, that make this elemental being a uniquely gender fluid character. It is a locus within which alchemy and magic are combined with elements of powerful sexuality and gender flexibility to furnish an exciting tool for the exploration, blurring and potential obliteration of the boundaries defining heteronormative models of gender and sexuality.

Interestingly, the more sexual and sexualised the sylph or sylphide character becomes, the less obvious are the boundaries of its body, the less clear the textual descriptions of its appearance and the less defined are its contours in visual representations. The opposite appears to be true when the sylph is depicted as a genie in fairy tale illustrations.  Because the genie-sylph has a clear-cut role and meaning, often that of helper to the protagonists, he is represented using equally clear and defined contours. The sylph appearing in narratives dealing with sexual desire, however, has an ambiguous status and so the lines demarcating its body are blurred or altogether absent. On the one hand, the clouds of smoke traditionally attest to the manifestation of the supernatural (Stewart 2002:372). This, of course, casts a doubt upon the reality of interactions with sylph characters – could the sylph encounter be simply a dream or fantasy, a metaphor for unarticulated desire, or perhaps an autoerotic experience? On the other hand, the shapeless, fluid representation hints at the ambiguity surrounding what the sylph is and poses questions regarding its gender. These differences in graphic representation in relation to their context and the role of the sylph character are exemplified by the three illustrations included in this post. The sylph, therefore finds itself on the very boarder between representation and omission, never fully categorised.

In the libertine (and essentially pornographic) convent novel by André de Nerciat entitled Eleanor or the Happy Person, the atomised and ‘airy’ nature of the sylph is used to its full potential to produce a particularly detailed description of sexual intercourse with a sylph. This depiction is extremely important because it offers an insight into the difference between a sylph and a human lover, thus highlighting the advantages of the supernatural in an erotic context. For instance, unlike with a human lover, the female protagonist, Eléonore, suffers no pain as she losses her virginity due to the sylph’s atomised body: ‘tightening and expanding the shape of his body at will, he penetrated inside her without difficulty or pain’ (Nerciat, 1800:22).

Curiously, in the same novel the sylph’s supernatural powers go even further. The (initially) female Eléonore, in an attempt to replace the sylph who is about to leave her asks him to turn her into a man. The sylph obliges and does even more; he grants Eléonore the power to have a male body for a year and then a female one for the next, enabling her to change bodies in this way and to stay young perpetually (30-1). It is somewhat appealing to the modern reader to interpret this wish as an expression of a transgender desire and its fulfilment the perfect realisation of gender neutrality and breaking down of binary opposition. Yet it soon becomes evident that the possibility to ‘switch’ bodies does not in reality entail transgression of gender norms per se. This is because the bodies that are successively received and swapped by Eléonore come with pre-installed norms of behaviour specific to each gender, which (s)he performs successively.

An important detail, however, is that partners are not changed at the same time as the change in biological sex occurs. This means that both homosexual and heterosexual relationships are possible within the same couple. And, this in turn, gives rise to a greater diversity in sexual and relational experiences but also creates an overarching continuity within the relationships, producing something of a ‘universal art of love’ (Delon 1999:24). Although this is promising and an important achievement in itself, the narrative seems to push back; Eléonore is distressed when after having been a male for a year and having entertained a homosexual relationship, she finds that now, as a woman, her engagement in sodomy whilst a man would be inappropriate and terrifying (Nerciat 1800:100-1). The author’s emphasis on the horror experienced by a (biologically) female character at the idea of sodomy is in keeping with mainstream codes of behaviour in eighteenth-century French society and in particular, in the context of its traditional ideals of femininity such as chastity and modesty. Thus, as she becomes a biological female again, Eléonore also enacts a gendered ‘performance’ more in line with what is expected of a ‘woman’ in this period.

Another erotic novel, Jean Galli de Bibiena’s The Doll (1747) features the sylphide character, Zamire. She engages in heterosexual relationships with human males but (openly) expresses sexual attraction towards a female human character. She wishes that ‘a sylph could possess her [the young Julie] or that [she, Zamire] could become a sylph herself’ (Bibiena 1996:91). While deliberating about her desire she also takes possession of an otherwise exclusively male prerogative – voyeurism. Disappointingly, Zamire never shapeshifts into a male sylph in order to take possession of the female beauty she lusts after and so her intrusion into the male sphere of dominance is curtailed. She also fails to approach and seduce her in her female form.

In Jacques Cazotte’s The Devil in Love (1772), the sylphide character, Biondetta/o is a demon. She is also a cross-dresser, and, more fundamentally, ‘her’ sex is not clear at all. But this particular ‘gender trouble’ is undeniably associated with corruption and ‘unclean’ desires. It is used to aggravate the suffering of the male protagonist, Alvare, at the hands of the mysterious Biondetta/o, whose ultimate goal is to corrupt him and to take possession of his soul (mainly by means of seducing his body). At one point in the narrative the sylphide appears as a woman who pretends to be a pageboy, who in turn cross-dresses to impersonate a female singer (Cazotte 1981:45). This multi-levelled gender confusion contributes to destabilising Alvare’s concentration, weakening his grip on reality and lays the ground for further diabolical actions. What is interesting in this context, is the fact that such complex gender indeterminacy is not granted by the supernatural ability of sylphs to shapeshift, but rather by the entirely human ability to cross-dress. Ultimately, within the framework of this narrative, gender indeterminacy is presented as a challenge to Christian values and is associated with wickedness. Yet the sylphide’s gender ambiguity does not prevent Alvare from being enchanted by her, but rather adds to her mystery and appeal.

All of the examples presented above reveal a complex paradox underlying eighteenth-century views on gender and sexuality; a conflicting system in which heterosexuality and clearly defined gender roles are the norm, yet reticent desires are the driving force that transpire through literary and intellectual discourse. This paradox is also illustrative of the multifaceted relationship between heteronormative expectations and the more gender fluid realities of eighteenth-century French society. The potential for queerness is certainly explored, sometimes only to titillate the (male) reader, other times in more insightful ways, but irrespective of the depth of the exploration the narrative often recalibrates to heteronormativity. 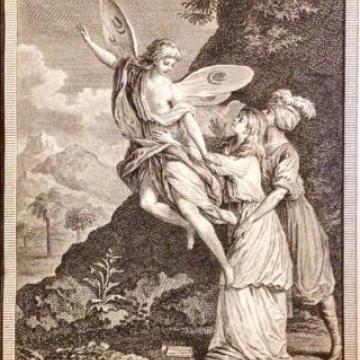