The Anglo-Norman Reading Group, convened by Dr Liv Robinson and Dr Jane Bliss, meets every two weeks, to read and discuss a wide range of medieval Insular French texts, ranging in date from the very start of the post-conquest period through to later medieval material.  As many medievalists will know, in recent years there’s been a concerted push to consider anew the sociolinguistic, literary and cultural relationships between the different vernacular languages spoken and written within the geographical space and the individual locales that form ‘England’—particularly the complex impacts which England’s major ‘co-vernaculars’, French and English, may have exerted on one another.  Anglo-Norman is coming in from the cold: its uses in a range of literary and non-literary contexts is being re-conceptualised.

In the wake of this, the Anglo-Norman reading group was founded in 2009, simply as a means of bringing together all those who might want to practise their Anglo-Norman by reading original texts.  It has since provided an informal forum for the sharing of expertise and experience in reading the French(es) of England.   We also host an occasional research seminar in Anglo-Norman, and have welcomed a range of speakers on Anglo-Norman language, history, literature and cultures, including Marianne Ailes (Bristol), Catherine Batt (Leeds), Richard Ingham (Birmingham City), Judy Weiss (Cambridge) and, most recently, Daron Burrows (Oxford).

The group has always been open to any and all members, regardless of levels of proficiency or disciplinary background, and one of the things the convenors have come to appreciate over the years is the way in which it fosters friendly collaboration and exchange of knowledge between individuals from a very large range of disciplinary and professional backgrounds. We welcome MSt students, Professors and everyone in between, and several of our longest-standing members are independent scholars and translators based in Oxford. As a group we are constantly surprised – and excited – by the sheer range of expertise which we assemble.  Last term, for example, our attendees included medievalists specialising in Old English philology, Middle English literature, French literature, musicology, Latin, legal history, military history and Byzantine literature and culture.  This gave rise to some fascinating interdisciplinary discussions, in which members enriched each other’s understandings of the language, literature and contexts which we were discussing, from the perspectives of their own disciplinary backgrounds and knowledge bases.  The round-table format of the group facilitates fluid and stimulating discourse between the members, and being able to draw on the expertise of those coming to Anglo-Norman from such a variety of backgrounds helps enormously with the rendering of the text into English as there exists between us a broad range of knowledge, allowing for little reliance on modern English and French ‘cribs’, which remain our last resort.

Yet this same interdisciplinarity can also give rise to tensions: Anglo-Norman was used for a huge variety of subjects ranging from chronicles, to legal texts, to language manuals, literature and much more.  The convenors try hard to vary the genre of texts we read, and encourage members to suggest future readings which they personally might find useful for research or teaching purposes. We have covered an eclectic range of material over the years, from extracts from the Anonimalle Chronicle, via a series of Anglo-Norman model court pleas, to Wace’s Roman de rou, Andrew of Coutance’s truly hilarious Roman des franceis, and (currently) Benoît de Sainte-Maure’s Roman de troie; however there are inevitably differences of opinion on whether (for example) we should cover one extract/text per session or spend longer (a term? A year?) on a particular text or topic.  There are clearly advantages, in terms of depth of understanding, to spending a sustained number of sessions reading from a single text, but this can prove understandably frustrating to members whose primary research interests lie elsewhere, and/or those who seek rapid breadth of coverage.

The other aspect of the group which can prove a challenge to foster, in practical terms, is also the aspect of which its convenors are most proud: its mixed levels of ability.  We realise how daunting it can be to attend a group such as ours as a new graduate, particularly when one is starting out learning to read Anglo-Norman with little previous experience of Old French.  We hope that we foster a relaxed and fun atmosphere in which all members feel comfortable in having a go at reading and translating, whatever their level of expertise – and we try really hard to create a supportive environment for newcomers to the field, in which advice from more expert readers can be offered in an informal but constructive way, which is helpful without being too formally ‘pedagogic’.  This can sometimes be a hard line to tread, but it is one of the cornerstones of our group practice, and something the convenors strive to promote and keep in everyone’s mind during each session.

Some members would like to see many more undergraduates taking part, arguing rightly that their attendance would expose them to literature and language not normally encountered on their courses, thereby nurturing future academic interest in Anglo-Norman, and that their individual readings of the texts would also prove a valuable contribution to our discussion.   But undergraduates’ time in Oxford remains heavily oversubscribed, and the research-based text choices which many of our members value do not always gel well with undergraduate syllabuses and reading lists.  In practice, therefore, we have evolved into a graduate-based group (although Liv has been inspired by the success of ANRG to start her own, undergraduate Anglo-Norman reading circle, aimed exclusively at her Course II English students who are studying Marie de France as part of their Medieval English and Related Literatures paper).

Navigating these experiences, tensions and differing expectations are, ultimately, all part and parcel of nurturing and participating in a thriving, critically engaged and rich group culture, in which our various members will, inevitably, have in mind different aims, motivations and benefits from the reading sessions.  As convenors, Jane and Liv have learned to try to be responsive to this diversity, and to allow the group to evolve organically as members’ interests and levels of expertise change throughout the year.

We leave the final word to Will, one of our most recent graduate members:

“Sitting in the plush settings of the Old Library at Brasenose College, a glass of red (or white, if you prefer) in hand on a Friday evening, you could easily be fooled into thinking that you might not actually spend the next hour and a half working through excerpts from Benoît de Sainte-Maure’s Le Roman de Troie. But you would be wrong. From the beginning of Michaelmas Term, through Hilary (and beyond!), we amateur Anglo-Normanists have been reading aloud (some more convincingly, others less so, though which camp I fall in I wouldn’t like to say…) and translating snippets of Benoît’s 30,000+ line epic with due enthusiasm.

Dating from the second half of the twelfth century, Benoît’s Roman survives in some 60 manuscripts and fragments from the Anglo-Norman world, though few can reasonably be dated to the time of the composition of the Roman. The poem, itself a retelling of the Trojan War, would go on to influence Boccaccio’s Il Filostrato, Chaucer’s Troilus and Criseyde and Shakespeare’s Troilus and Cressida, and it was even translated into medieval Greek as The War of Troy. Such was its reach during the medieval period that no other literary French text from the twelfth century survives in as many manuscripts as the Roman. So far so significant, but what of it to me?

Though my own background is in modern foreign languages (French included), I myself am a graduate student in medieval English. As such, the convivial atmosphere of the Anglo-Norman reading group allows me to indulge in my predilection for Old French/Anglo-Norman poetry, without fear of chastisement in the classroom for inadvertently uttering some orz moz (‘swear word’) or another, when in fact I just wanted to say ‘he was’ (il fut). Fortunately, those of us with a foul mouth were relieved to be able to—indeed encouraged to!—utter such orz moz when Daron Burrows, Associate Professor in Medieval French at St. Peter’s College, delivered his ‘Anglo Norman Sex Talk’ seminar to wrap up Michaelmas Term in seventh week.

And this perfectly sums up for me what the reading group is about. Here one has the chance to share the enthusiasm that surely launched us all down the sometimes bumpy, pothole-ridden path of academia, but at times gets buried by other concerns and cogitations. As ‘Salemons nos enseigne e dit’ [Solomon teaches us and says] in the prologue of the Roman, it is our solemn duty to pass on knowledge from great books down through the generations, but here one can do so and let one’s hair down, raise a glass, and take pleasure in reading medieval poetry in the original language.” 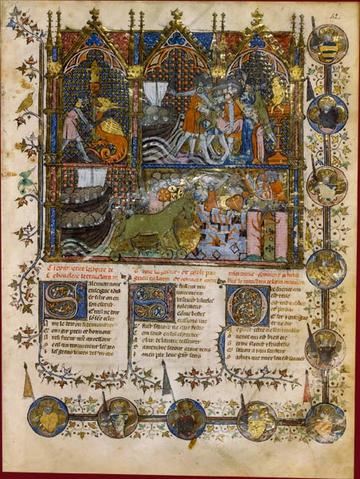