The cane, the hammer and red riding hood - RUNNER UP of the 11 - 17 Category, TORCH Storytelling Competition

The cane, the hammer and red riding hood

She walks in the snow. Pine tree leaves fall onto her white hood, her boots barely denting the pillows of ice and snow. She has not many friends nor acquaintances; no enemies or rivals. Just her hood, as memorable as snow and blood.

I however watch her. Her boots can trample all over my heart or take it with her on the same journey. I wish to be her friend, or perhaps more… Every week I smell her white hood and baskets of goods. She walks up to her grandmother’s barren garden and knocks on the door. A few minutes later her grandmother welcomes her with a beautiful smile only their family can muster.

My name is Wolf and I love her dearly so.

“Thank you my dear.” A raspy voice calls out, her grandmother turns and walks with her cane to the kitchen. Using her hands. the girl says “It’s fine, grandmother.”’ Then the doorbell rings – that’s me. The girl elegantly opens the door. What dark brown eyes she has. What elegant cascades of hair you have, I think. With another flurry of her hands she says “Come in”, and smiles. I fumble with my tool belt, melting under her gaze, as she gestures to the kitchen and leads me there.

“Ah Wolf, thank you. Now just please, could you fix the cabinet? It’s just a quick job.” With an exchange of a handshake and a brisk nod I’m left alone again. I open my toolbox, climb upon a step ladder to inspect it, and – one off the hinges broke off. I’m about to hammer a nail in when I see the girl at the doorway.

“Hi” I say. She carefully watches my lips.

“Hi” she gestures and leaves. I sit the nail in and raise the hammer. She isn’t deaf so why did she watch my words form? I swing the hammer but with my mind muddled I hit my fingers with such force I break the skin – ouch! The girl rushes in, her eyes wild. Immediately she tells me to get down and uses the ladder to reach into a shelf next to the cupboard I was fixing and pulls out a bandage. She climbs down and slowly covers up my blood in white cloth, and then our eyes meet. I could stay here forever looking into her dark brown eyes but suddenly there’s a scream. We run to the hallway and see her grandmother face down on the floor with her arms twisted in an unnatural position and a trail of blood from the top of the stairs as well as blood staining the carpet. Silence fell and no one said anything. Silently, the girl lay her white cape over her grandmother. Soon that too became soaked red.

Later that day the police and the medics arrived to transport the body. I had never been a fan of the police, not since I was framed for a crime and they didn’t bother sticking up for me. They ‘investigated’ my ‘robbery’, and – I was exiled to live in the woods. I can only make money from the small wood figures I imagine – the characters from my dreams. Or, I suppose, the occasional job at the girl’s grandmother’s house. Or, I suppose now, her late one.

“Hmmmm, looks like her knees buckled, perhaps her knees finally gave way.” The police muse thoughtfully, glaring at me. Probably coming up with some grasping at straws theory that I killed her. Then the police notice me holding the cane with a bandage blossoming red…. They smile. “Or someone pushed her.” One of the policemen snarls suddenly and I snap my head up. He heads towards me and grabs my wrist. “Wolf, you are sentenced to death for murder.” The policeman begins to pull me towards the door but the girl – still with melancholy tears staining her face – jumps in front of him, gesturing, quickly attempting to explain what happened, but he just pushes her away. We stare at each other. I watch her making a few more motions but I’m soon yanked out of the cottage, only to have made out an ‘I’ and an ‘L’.

The police pull me up to the gallows and tie a rope around my neck. A whole audience has come to witness the big bad Wolf die.

“Any last words?” The police ask. I don’t say anything, no one could hear me over the chanting anyway, so instead I speak the language only the girl and I share. And through the crowd I see a red cape and two hands miming “I love you, too.”

That’s the last thing I see in this life.

I still watch the girl. Now she owns the cottage and goes to it every week to tend to her roses and the poppies on the two graves, her grandmother and me. Except now she wears a red hood. Red, the colour of blood. Inside the cottage are her two prized possessions, a cane and a hammer. They are memories she treasures as anyone would. The cane, the hammer and red riding hood. 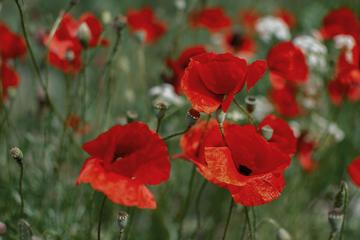