The Death of a Pacifist?: On Akiyuki Nosaka's Death

A new blog post from the Fiction and Human Rights Network

The Death of a Pacifist?: On Akiyuki Nosaka’s Death

The Japanese writer Akiyuki Nosaka died last month. He is best known, internationally, for his semi-autobiographical novel A Grave of Fireflies, made famous by Studio Ghibli’s animated film adaptation. Domestically, he was also known for his media presence. Although his worsening health limited his TV appearances in the last decade, he wrote prolifically until the end of his life, addressing a wide range of issues from the Fukushima nuclear disaster to the Trans-Pacific Partnership negotiations.

Seeing Nosaka as their ideological ally, the Japanese centre-left have expressed the worry that the writer’s death might indicate a further decline in the country’s vanishing post-war reformist consensus, consisting in the core values of pacifism, popular sovereignty and human rights. As I discussed at the Fiction and Human Rights Network inaugural conference, post-war Japanese thinkers and writers have considered those values organically connected, and they have mobilised their creative powers to make the country break away from its militarist past. Nosaka’s Grave (1967) exemplifies this collective attempt, as do Kenzaburo Oe’s Hiroshima Notes (1965) and Masuji Ibuse’s Black Rain (1965).

A younger generation of realists in Japan have long challenged the centre-left hegemony and the presumed indivisibility of the pacifist, liberal, and democratic values. They have, for example, argued with increasing influence and popularity that the protection of human rights sometimes requires the use of military force, especially in the post-Cold War context in which the nation is supposedly expected to play a greater role in maintaining a new world order.

The pacifists see this and similar claims with deep suspicion, contending that a small concession to the realists would in effect be a significant step towards a pre-1945 style fascism and militarism. The realists, on their part, consider their opponents’ claims excessively alarmist, politically naïve and morally irresponsible, arguing that the overly utopian pacifism in our highly non-ideal world could risk citizens’ rights to life, liberty and property. The divide was particularly sharp last year, when the Diet (Japanese Parliament) passed the controversial national security legislation that could let Japanese troops fight overseas for the first time since the end of World War II.

It is hardly surprising against this background that many Japanese papers and magazines, especially left-leaning ones, have presented Nosaka’s death in political terms, as the death of a pacifist. There is good reason to believe that the deceased would not have minded this narrative. Reading hundreds of pages he wrote in the final few years of his life, one gets the impression that the message he ultimately wished to deliver concerned the awfulness of war that appears prominently in Grave; and he consistently tied the pacifist message to his endorsement of liberal and democratic values.

In early 1945, the US air force carried out an area-bombing offensive against the city of Kobe. Among the estimated 7,491 people killed in the bombing was the young Nosaka’s surviving parent; amid the rubble and debris lay what used to be the family’s home. The orphan boy subsequently saw his one-year-old sister slowly dying of starvation; he cremated her corpse a week after the end of the war. This season of hell was the writer’s zero hour. Nearly seven decades later he wrote: ‘the war occupies almost all of my life’; ‘I am still unable to leave the burnt-out ruins’ (Mainichi Shimbun, 19 August, 10 June 2014). Only death could end his wander through the ruins – real and imagined.

The representation of Nosaka’s death as the death of a pacifist thus seems to honour the late writer’s wishes. But I wonder if there is something unfortunate to this, for expressly political themes, undoubtedly important though they are, are only a part of Nosaka’s prolific work.

In much of his lifetime, the writer was also and deservedly known for his darker, more satirical, deliberately amoral and subtly apolitical stories such as The Pornographers, a hilarious portrait of the absurdity of human life in extremis. To my mind, this side of his work is aesthetically no less significant than the other, more political side represented by Grave. However, the late Nosaka spoke earnestly about politics, as he genuinely believed that various indicators such as Japan’s declining freedom of expressionsignified a fundamental rightward drift potentially leading to a return to pre-1945 barbarism. He in consequence did his share to inflate the significance of one aspect of his work at the expense of the rest.

We have every reason to hope that the late writer’s worry was exaggerated, his political diagnosis was wrong, and his alarm bell went off too early and too frequently, as is often the case with those who survived the age of extremes. Freedom from politics is one of the basic freedoms supposedly secure in a stable liberal democracy. Nosaka could not enjoy this freedom when he was a child; he fought for it for the rest of his life. The fact that we find it hard to appreciate equally the political and non-political sides of his work indicates that his efforts have not been altogether successful, that there might be something to the late writer’s worry.

In Japan as elsewhere, curbing citizens’ basic rights and liberties is ever easier, and the temptation to do so is ever greater. Only when the nation manages to tame this temptation will politics stop colonising Nosaka’s legacy. Only then will we be able to appreciate the versatility of his work, seeing his death as much more than the death of a pacifist. 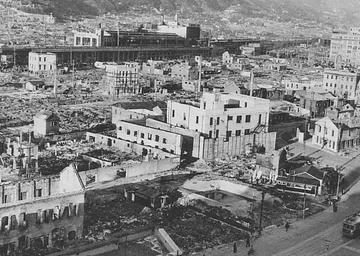