"The Doctor and the Stethoscope" - Runner Up of the Over 18 Category, the TORCH Humanities and Science Essay Competition

The Doctor and the Stethoscope: a match made in nineteenth century fact and fiction

A white coat and stethoscope, the instant signifiers of a doctor. How and why did this 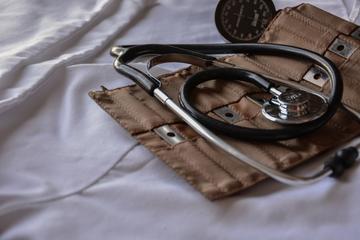 scientific instrument above all others come to be associated with the physician? The earliest version, created in 1816[1], was no more than a rolled up cone of paper but this simple device to augment the sounds from inside the body (mediate auscultation) signified a huge practical and psychological shift in perception: the ability of the doctor to hear, or ‘see’, inside a patient’s living body. In an age where we are used to seeing multiple modes of body-imaging such as X-rays and ultrasound, it is perhaps hard to grasp the radical breakthrough this provided in the early nineteenth century. Until this time the only means of diagnosis was a combination of the patient’s own evidence and outward symptoms, or post-mortem. This ability to penetrate the outer body to reveal the inner workings of a living human being had profound consequences for physicians and patients. This transfer of knowledge of the body from patient to doctor is a theme explored in George Eliot’s novel Middlemarch (1871/1872).

Middlemarch, set in the eponymous provincial town, just before the Great Reform Act of 1832 takes ‘reform’ as its central theme, with virtually every character engaged in some kind of change – physical, psychological, political or social. In this novel the leading protagonist, Dr Lydgate, is an outsider bringing new medical knowledge, including the stethoscope, to an insular community much in need of reform. Inadequate hospitals and doctors using out-dated methods led many to be concerned about the poor quality of medical practice as the banker Mr Bulstrode explains: ‘ The standard of that profession is low in Middlemarch’ (I: 2: 153).[2] Lydgate endeavours to highlight the import of the new scientific device and the value of the doctor in conveying specialist knowledge from ‘inside’ the patient to the ‘outside’.

Lydgate arrives with an ambitious reforming agenda: to use modern methods in his general practice, to conduct scientific research, and to reform medical education and so enhance the profession and his own position within it. Travelling from the metropolis, Lydgate deliberately chooses to settle in a provincial community[3] to try put into general practice reforms at the risk of incurring the criticism and opposition of his ‘professional brethren’ (II:13:153), while attempting the larger ideological reforms of his profession.

Middlemarch is credited with being one of the first ‘scientific’ novels,[4] and given the
prominence of Lydgate, the novel is also seen as a medical novel.[5] In preparation for writing Middlemarch, Eliot read widely on medical history and referred to scientific treatises, filling several notebooks with her findings. In the years 1868-9 she made copious notes in what she called Quarry for Middlemarch,[6] filling half of one notebook (Quarry I) with jottings relating to medical research. Many of the entries relate to the Lancet,[7] the most radical journal of the reform period, and it seems that Eliot’s own research was an important element in her efforts towards realism, albeit an historical ‘reality’ of forty years earlier. The placing of the story in the early nineteenth century lends the reader the benefit of hindsight with full knowledge of advantages of scientific developments and medical reforms that have occurred by mid-century. Eliot employs several scientific devices in the novel: the scalpel in relation to anatomy and dissection; the microscope, an instrument widely used at this time but lent metaphorical weight in Middlemarch by Eliot and her fictional characters; the stethoscope, recently introduced to England, and brought to Middlemarch by Lydgate. By the early 1820s the instrument took the form of a wooden cylinder ‘about one foot long’ with a ‘funnel-shaped hollow at the end’[8]. The situation of the novel in 1829/30 makes the stethoscope the most up-to-date of the devices.

Lydgate brings the stethoscope with him to diagnose his patient Edward Casaubon. He
‘quietly’ observes Casaubon and uses the instrument ‘which had not become a matter of course in practice at that time’ to hear inside Casaubon’s body’ (III:30:320). Lydgate’s use of the stethoscope places him as a physician ahead of the mainstream, propelling himself and his profession forward with the new diagnostic technique, fulfilling the nineteenth century trope of alacrity and belief in ‘progress’.
The stethoscope was invented by Rene Laënnec (1781-1826) in Paris in 1816 and following publication of his treatise De l’Auscultation Mediate in 1819, it became the first medical instrument to gain international popularity.[9] As Jacalyn Duffin notes ‘even Laënnec’s enemies adopted the stethoscope, impressed by how easily and accurately it detected signs of internal change.’[10] Through use of the stethoscope and developing expertise in listening to breath sounds, physicians were able to diagnose pulmonary ailments including bronchitis, pneumonia and tuberculosis.[11] What was particularly significant about the stethoscope was the way that the inside workings of the body could be perceived on the outside. This concept and its practical
application was revolutionary. It is this ability to ‘see’ inside the body that forever changed the power relationship between patient and doctor.[12] Before this invention, the doctor relied on history-taking from the patient and external observation of symptoms.[13] Now the doctor could read symptoms unknown to the patient.

The imposition of ‘rules’ also shifts the power towards the physician and away from the
autonomy of the patient. Lydgate places the stethoscope on Casaubon’s chest and
concludes that he is suffering from ‘fatty degeneration of the heart’ (IV: 42: 460-461). In this context, part of the ‘remedy’ Lydgate suggests to Dorothea is to leave Casaubon in the dark about his own condition, so alleviating him of further anxiety and strain on his heart: ‘I think it desirable for him to know nothing more than that he must not overwork himself and must observe certain rules.’(III:30:323) Dorothea, herself a reformer, is open to Lydgate’s new medical treatments, thanking him for telling her ‘the truth’ and bowing to professional knowledge: ‘you are a wise man, are you not? You know all about life and death. Advise me.’ (III:30:324). Through ‘seeing’ invisible symptoms doctors became the gatekeepers to and keepers of secret knowledge unavailable to the patient.

Lydgate admits to the limitations of his training and knowledge when he confesses to
Casaubon that though he can provide ‘anatomical or medical details’ of Casaubon’s heart disease he cannot predict the course of the disease or life expectancy (IV: 42: 461). What Lydgate also cannot diagnose or treat, any more than Casaubon, is the emotionally barren condition of Casaubon’s heart and the lack of real love between him and his wife Dorothea. Lydgate’s use of the stethoscope in his diagnosis of Casaubon shows that specialist and up-to-date knowledge is out of reach of the patient himself. In a sense, Eliot is questioning the value of past knowledge as opposed to new discoveries. Casaubon is painted as an inward-looking academic whose researches on a dead language, in which he has not kept abreast of new thinking, merely gathered dust. Dorothea, whose initial admiration for her
intellectual husband transforms into disillusionment, points to scientific knowledge as more effective way of harnessing an objective ‘truth’. In her distress she asks him: ‘All those rows of volumes [. . .] will you not make up your mind what part of them you will use, and begin to write the book which will make your vast knowledge useful to the world?’ (I: 20: 232).

The invention of the stethoscope created a situation in which the doctor had greater
understanding of a body’s inner workings than the patient themselves. In the twentieth and twenty-first centuries scientific discoveries and medical breakthroughs have led to ever greater faith in medical research, for example, the hugely improved outcomes for patients with cancer and HIV/Aids through new diagnostic tools and drugs. On the other hand, with each new discovery so much remains unknown and the expectations of patients grows exponentially. With the advent of the internet, the general public can access detailed knowledge about the inner workings of the human body. The smartphone and other bodymonitoring devices give ever-more personalised data on the people’s own health to a degree that self-diagnosis has become more common. In some ways, people are given a new autonomy over their bodies – a sense that they can again listen to their own bodies and interpret/diagnose symptoms. This can reassure and inform but it can also be a source of anxiety and even dangerous misinformation. The ownership of knowledge about the body oscillates like a pendulum between patients and medical professionals. Lydgate acquires ‘interior’ knowledge of the body through autopsy and the stethoscope, though his abilities to heal are limited. In progressive medical practice, this increased knowledge, success in pathology and diagnosis, results in better outcomes for patients. Even now, in the age of unparalleled scientific advances and transmission of information, the image of the stethoscope symbolizes the hope placed in our doctors and research scientists for new discoveries as well as treatment and cures.