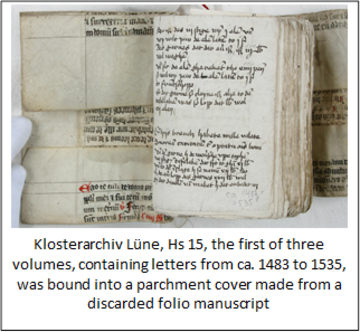 The colourful corpus, comprising nearly 1800 letters written in Latin, Low German and a characteristic mix of both languages, is a unique testimony of female writing in the Middle Ages. The edition brings to light a forgotten culture of late medieval letter-writing. The nuns formed a network of religious, social and economic alliance through the whole Hanseatic region in their correspondence with important political and religious powers of their time and in the “intranet” of the daily exchange with the neighbouring convents on the Lüneburg Heath. The correspondence also provides insight into how the women reflected their specific communicative needs between daily business and spiritual aspiration – and how they reacted to and engaged with the Lutheran Reformation which was energetically proposed by the Duke of Brunswick-Lüneburg and equally vehemently opposed by the nuns.

The project brings together a British-German working group in an interdisciplinary approach to allow a comprehensive insight into the communicative and rhetorical strategies and the knowledge exchange which created the nuns’ networks. One of the two RAs will be Edmund Wareham (Jesus College), currently finishing his DPhil on another late-medieval German convent, the nuns of Günterstal. The digital framework for the edition will be hosted by the Herzog August Bibliothek Wolfenbüttel, built on the open access edition of the letters by Andreas Karlstadt which was developed by Jennifer Bunselmeier (St Edmund Hall). One of the most exciting features of the project will be to work closely together with the successors of the letter writings, the female Protestant community living in Kloster Lüne. (link to a video-clip of an interview with the abbess of Lüne, Baroness Reinhild von der Goltz). It complements the Knowledge Exchange funded project ‘Recording the Reformation’ which will see a group from Oxford travel to Kloster Lüne next July. Thus the nuns’ network, spanning across a seminal century of late medieval reform and reformation, will widen its cast to link also 21st century German and British scholarship and public.

The project will start in February 2016 with a 2-day-workshop of the whole binational team with invitations also to representatives of the Klosterkammer (the monastic chamber of the Lüneburg convents) and the Herzog August Bibliothek Wolfenbüttel which will take place in St Edmund Hall.