In February 2017, medievalists from across the disciplines and across the world gathered at St Hilda’s College for a conference on the study of the medieval bible. The conference, generously sponsored by TORCH and Oxford Medieval Studies, focused on the work of the medievalist Beryl Smalley (1905-84), whose research and writing remain fundamental for scholars working across the fields of theology, politics and history.

Beryl Smalley pioneered the study of the ‘literal’ exegesis of the medieval bible, radically altering the way in which medievalists approach questions of scriptural exegesis and biblical commentary. Her most famous work, and the book from which the conference took its name – The Study of the Bible in the Middle Ages (1941) – is a text which almost all students in medieval studies will have come across. It remains a rich source of inspiration, and entire PhD projects are still to be found by chasing up its footnotes.
It seemed particularly appropriate to be discussing Beryl Smalley’s legacy at the college (St Hilda’s) where she had studied as an undergraduate, and later worked as tutor and vice-principal. Moreover, as we were reminded in the opening session, the need to make the case for the depth and relevance of medieval theological thought is as urgent now as it ever has been. There is still a tendency to consider medieval philosophy as a matter of ‘Aquinas or nothing’. Oxford itself could still be doing better in the way it invites its undergraduates to engage with medieval theologians (the university’s flagship paper on political thought, ‘Theories of the State’, jumps from Aristotle to Hobbes with nothing in between).

The conference began with two fascinating papers which set the tone for the day. Professor Lesley Smith (who had been supervised by Beryl Smalley during her DPhil) spoke on the topic of ‘William of Auvergne and the Missing Bible’. Professor Smith’s paper brought up some of the challenges of writing medieval biography and attempting to engage with medieval theologians. She asked how medievalists can navigate their subjects when separated not just by cultural and temporal distance, but also by complex layers of textual allusions and typologies.

Professor Smith also highlighted how the connection between contemporary concerns and medieval research shaped Beryl Smalley’s own writing, particularly in her choice of topic. Working on the Christian Hebraist Andrew of St Victor in the 1930s, Smalley was engaging both with the medieval world and with her contemporaries. Her decision to focus on how much Christian medieval scholars owed to their Jewish counterparts was a deliberately challenge to prevailing political narratives.

The second paper in this session, from Dr Eyal Poleg of QMUL, entitled ‘Exegesis, Mediation and Materiality’, was an invitation for medievalists to think more broadly and more carefully about the way in which we encounter theological texts, and, in turn, the circumstances in which their medieval readers encountered with them. Exegesis should not be taken in isolation or conceived of as a discrete process, Dr Poleg emphasised: it was intimately connected to the liturgy, and medievalists of all stripes benefit from thinking about the experiential aspects of contact with medieval theology.

Dr Poleg’s advice – not to miss the devotional wood for the exegetical trees – set the tone for a meditative and stimulating day. The themes he raised were returned to during the rest of the conference, including a discussion of questions of ‘genre’ and classification; and how modern scholars order the relationship between medieval texts versus how their medieval readers did so.

To pick out just a few examples of those discussions: Dr Julie Barrau’s (Cambridge) paper on ‘Patristic compendia as exegetes’ toolboxes’ took us down to the building-blocks of medieval theological commentaries. Elisa Monaco (Zurich) brought us to the other end of the scale, with a consideration of how even the most complex of texts (namely Dante’s Commedia) might be read as a work of theological instruction. Dr Ayelet Even-Ezra (Hebrew University, Jerusalem) invited us to think about diagrammatic representations: the relationship between how a text is ordered and how divisiones were visualised in medieval manuscripts in series of complex tree diagrams. The day also offer new light on familiar figures, with David Runciman (Cambridge) examining a series of sermons attributed to the twelfth-century bishop Gilbert Foliot, and making the case for the ‘theological’ sides of a figure better known for his entanglements in political controversies.

All contributors drew attention to the need to think about how medieval texts are put together, and how the technical details of composition and organisation might speak to a ‘bigger picture’ concerning the place and purpose of exegesis in the Middle Ages. Appropriately, for a conference focused around the idea of ‘new developments’ in medieval exegesis, the day concluded with a look to the future, with Dr Toby Burrows (University of Western Australia) providing a comprehensive tour of the world of digitisation projects of medieval manuscripts.

The conference offered an insight into new research in medieval biblical scholarship and a tantalising glimpse into a number of projects which will be coming to publication within the next few years. One only hopes that Beryl Smalley would have thought the day a fitting tribute. 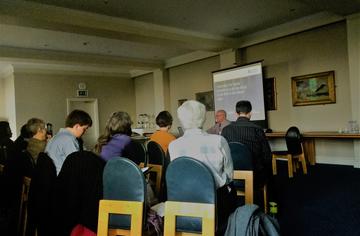