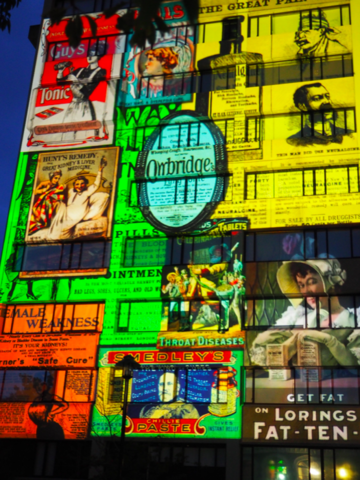 This past Sunday, the University of Otago’s Richardson building hosted a brilliant light show, exploring how the Victorians grappled with a world in transition. Along with the English and linguistics programme, William Evans Fellow Prof Sally Shuttleworth presented ‘‘The Speed of Modern Life: Dunedin’s Victorian Light Night’’. By all accounts, it was a tremendous success. I only wish I could have been there in person.

But even though I was cloistered away in my gloomy bedroom on the other side of the globe, I felt connected to the event. You see, Prof Shuttleworth is from Oxford University, and her light show was first projected here at my place of work, Oxford University’s Radcliffe Observatory Quarter, in November 2018. My colleagues from the Oxford Research Centre in the Humanities (TORCH) organised the event last time.

When we had the show, it was incredible. A tumult of bright colours and shapes, wheeling and spiralling over the gorgeous sandstone building, enthralling hundreds of onlookers. Upon hearing that the show would move to my beloved old home, Dunedin, I couldn’t help but feel proud — of Prof Shuttleworth, of my colleagues at TORCH, and of both universities.

The light show is a collaboration between Prof Shuttleworth and The Projection Studio creators Ross Ashton and Karen Monid, who have worked on some of the most famous buildings in the world, including the English Houses of Parliament and Buckingham Palace.

The Speed of Modern Life illustrates the pressures faced by the Victorian people, from the proliferation of certain diseases, to the rippling expansion of railways across the British empire. The light show and accompanying lecture explore the rising issues of environmental pollution, the place of the child in society, phobias and other mental health concerns.

And, of course, we are facing similar pressures today. The Covid-19 outbreak has kickstarted a parallel outbreak of paranoia, stockpiling, false news and misinformation. Naturally, and understandably, people are stressed and deeply anxious. Mental health issues are at an all time high, and New Zealand tops the charts for the highest suicide rates of young people in the developed world. We’ve passed the point of no return with climate change — sea levels are rising, weather is becoming increasingly abnormal, and schoolchildren are striking across the globe.

On September 10, 2016, the Diseases of Modern Life project — the project upon which this light show was based — was featured in the Dutch national newspaper Trouw. This article draws upon the concerns of renowned Victorian physician Sir James Crichton Browne, who worried about the increased speed of thinking and acting demanded by the modern age, and who said: ‘‘Over the course of one month, our brains must process more information than our grandfathers had to in a few years of their lives’’ in a speech to the British Medical Society. Crichton Browne believed that such demands would cause great stress to the brain.

Upon reading this account, Prof Shuttleworth recognised parallels with our own time, in which 21st century denizens are overloaded by an indefatigable stream of external stimuli. The telegraph, railway, steam-engine and electricity may no longer be awe-inspiring or revolutionary inventions, but instead we have the internet, smartphones, space travel, and self-driving cars.

Prof Shuttleworth’s research team has analysed hundreds of novels, magazine articles, and newspaper columns in order to understand changes to the body and mind in the industrial Victorian age. The works of Charles Dickens and other titans of Victorian literature have been examined, but Prof Shuttleworth’s team has also turned to ‘‘many texts that would not be considered literary landmarks but that nonetheless give indications of what people of the time were afraid of’’.

Although we might be predisposed to think of the Victorians as stout, stern, unamused dowagers, stern fathers, religious fanatics, and sooty child chimney sweeps, we can learn a lot from them.

Prof Shuttleworth points to the British doctor Benjamin Ward Richardson who penned texts and treatises on every subject under the dingy sun of the industrial area. Richardson studied problems from myriad disciplines and perspectives, linking the question of public health to subjects such as work, urban planning, industrialisation, and art in his book The Diseases of Modern Life, after which Prof Shuttleworth’s research project is named. Speaking on Radio New Zealand, she said Benjamin Ward Richardson was ‘‘one of the first to argue that cities should be surrounded by green space and he wanted every public building to have its own garden’’.

I can’t help but wonder: will our descendants, a century or so from now, ever project a light show upon their buildings, depicting us? If they did, what would their brilliant moving images depict?

Would we see doctors and nurses caring for patients with Sars and Covid-19? Would we see the incredible efforts of people like Corinda Taylor, of Life Matters Suicide Prevention Trust, educating and caring for the community? Instead of the rising railway, would we see bright images of Teslas, drones, and the Space Launch System? Instead of the telegraph, would there be flickering figures of smartphones, and young officer workers crouched over ominously glowing computer screens?

Only time will tell. Perhaps these future people will learn from us, as much as we can learn from the Victorians.