The Words that Shape the World: The Global History of the Book

The Words that Shape the World: The Global History of the Book

The Global History of the Book (1780 to the present) was an international interdisciplinary workshop held on 4 and 5 December 2014 at the Ertegun House in Oxford. It was organised by a team of doctoral and postdoctoral researchers in conjunction with the Oxford English Faculty’s Postcolonial Writing and Theory Seminar, the Oxford Centre for Global History, the John Fell Fund and the Ertegun Graduate Programme in the Humanities. The workshop brought together scholars from around the world to examine the interplay of the local, transnational and global dimensions of book history.

The workshop was prompted and inspired by the publication of Ten Books That Shaped the British Empire: Creating an Imperial Commons (Duke UP, 2014), edited by Antoinette Burton (Illinois, Urbana-Champaign) and Isabel Hofmeyr (Witwatersrand), which had its very successful UK launch on the first evening of the conference. Burton and Hofmeyr attended the proceedings along with four other contributors to the volume who gave short keynote addresses on their respective chapters from the book: Elleke Boehmer (Oxford) spoke on Baden-Powell’s Scouting for Boys, Aaron Kamugisha (West Indies, Cavehill) on James’s The Black Jacobins, Catherine Hall (UCL) on Macaulay’s History of England and Marilyn Lake (Melbourne) on Pearson’s National Life and Character: A Forecast.

The workshop organisers put together an eclectic programme which included an exhibition in the Bodleian Proscholium of some of the volumes discussed in the book or during the conference. In addition to the keynote panels, the event also included a large variety of conference papers from historians, literary critics, political scientists and cultural studies scholars. As well as covering multiple disciplines, the presentations spanned the globe, illuminating the contexts of book production, circulation and reception in Latin America, the Pacific, Europe, the Middle East, Africa, India, and Australia.

The organisers chose to experiment with the conference presentation form, adding in two ‘soapbox’ panels to the proceedings which were prompted by the Ten Books That Shaped the British Empire format. In these, thirteen scholars made seven-minute ‘pitches’ for alternative books that shaped the colonial and postcolonial world. In dynamic and often hilarious presentations, and sometimes contending with heckling from the audience, presenters argued for the global influence of books which included Ngũgĩ’s Weep Not, Child (James Currey),  Achebe’s Things Fall Apart (Tamara Moellenberg), Danquah’s The Akan Doctrine of God (Rouven Kunstmann) , and Mandela’s Long Walk to Freedom (Erica Lombard). These sessions were one of the real highlights of the conference.

Perhaps most striking, however, was the workshop’s achievement of real interdisciplinary conversation characterised by good humour, genuine interest in fostering dialogue between different methodological approaches, and a common concern with the book as not only a product but also a productive force in the world.

Erica Lombard is currently completing her DPhil at the University of Oxford. Her thesis explores the nostalgic boom in post-apartheid South African literature. 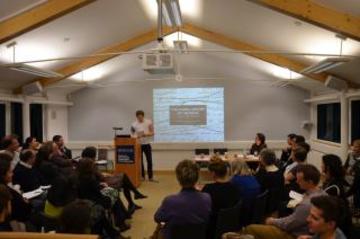