Niamh White recently completed her BA in Ancient & Modern History at Keble College, University of Oxford, and hopes to pursue postgraduate study in the field of women's, gender, and sexuality studies. Her undergraduate thesis explored conceptualisations of feminist space within the student women's movement at Dartmouth College, New Hampshire. In this blog post, Niamh examines the reception of queerness within this women's movement and identifies how the denial of queer space was used as a ‘survival strategy’ for hegemonic (white, middle class, heterosexual) feminism. Niamh's blog post is adapted from the paper she delivered at the Queer Studies Network’s undergraduate symposium held in May 2018.

From the 1970s to 2000 there existed nearly three decades of vocal, radical, and angry feminist agitation at Dartmouth College, NH, which died out in the late 1990s and has not resurfaced since. Student feminist groups were organising their own ‘Take Back the Night’ marches, collecting signatures for the National Abortion Rights Action League's petition to Washington, and establishing a task force to investigate the misogynistic attitude of Dartmouth's faculty, administration and students.[i] The picture in 2018 is wildly different: none of Dartmouth’s feminist publications have survived and the university no longer has any feminist groups or societies. Three decades of vocal, radical, and angry feminist agitation have been followed by two of silence.

Questions of survival become incredibly pertinent in the light of the swift and total demise of campus feminism at Dartmouth: how did this feminism come to operate, what kind of spaces was it able to create, and how were they maintained until their collapse? Delving deeper into the journals and publications of Dartmouth's women's movement, questions of queer feminist survival also come to the fore. Lesbian, bisexual and queer experiences and accounts of women trying to understand the relationship between their queerness and feminism pervade Darmouth’s archives. Yet, despite the prevalence of queer voices in the archives, specific writers and accounts are frequently side-lined in the written responses of heterosexual women and in the feminist papers and zines framing queer issues as tangential to the feminist cause.

The specific context of Dartmouth – a college that was found to be institutionally misogynistic by the aforementioned task force, a college which adopted co-education very late, and a college whose unique D-Plan meant students took varying on and off terms (thus changing the cohort on campus for each semester) – meant that feminism as a whole was forced to find strategies of survival and emphasise a togetherness and superficial sisterhood which pushed queer feminism to the side-lines.

From the establishment of the Dartmouth Women's Association in 1975, the first feminist group on campus, feminist space on Dartmouth's campus was self-defined and maintained; student feminists themselves dictated the politics of the spaces and the feminism it encouraged. In 1982, the DWA became the Women's Issues League, although its goals and actions remained the same.[ii] There was a short lived direct action group called Womben against Dartmyth and a number of student-led feminist publications produced from the 1980s to 2000 such as  Women's Writes, Womyn's Review, Spare Rib, Inner Bitch, Uncommon Threads.[iii]Most of the evidence for this paper is taken from these publications and a set of communal journals that feminist students used to communicate with one another[iv]

In terms of explicitly queer feminism, there was a Lesbian, Bisexual, and Queer Women's group but it is difficult to pinpoint how active it was. It is mentioned frequently in the journals, but usually only in the context of somebody asking to reinstate it or for more people to attend.

Many of the entries in the journals characterise Dartmouth's feminist spaces as safe havens amidst the hostile environment of the college. However, a notable exception to this trend exists in the form of queer writers who state that while they appreciate those spaces, they prefer others, or do not feel fully safe, or that they are the right 'fit' for them:

And - this space is not somehow, the right space - again, because I'm intimidated by superfeminists (sorry), and myself. I need lesbian support-"group"[v]

This entry suggests two things. Firstly, that feminism seemed impenetrable and there existed concerns over the cliquish nature of some of the key activists, and secondly, that this woman was unable to reconcile her own experience and her own self with the politics and people of the space. Where heterosexual women wrote of finding themselves, and of finding safety, queer women expressed a sense of disconnect. The feminist spaces were somehow not the ‘right’ spaces because they lacked a queer outlook.

In one of the calls for the Lesbian, Bi, and Queer Group to be reinstated in July 1980, a student called Martha described it by saying that

Sometimes it served as a consciousness raising group. Always we sat and talked and sometimes we laughed and cried.[vi]

This description fits the kind of space that queer women students said they needed, yet reorganising the group remained a struggle. In this same entry, Martha states that if they wanted to reinstate it, they would have to change the time and date, as the traditional time of Tuesday lunch had been taken up by a new feminist discussion group, open to all women students regardless of sexuality. The goal of exclusively queer spaces was thus complicated by the issue of co-existence with heterosexual feminism.

Queer women were not excluded from Dartmouth's student feminism, but the fact of their inclusion did not necessarily make the space inclusive. A look at the publications demonstrates this: the two issues of Inner Bitch, a zine published in the early 1990s, focus predominantly on the issue of sexual violence perpetrated by heterosexual men against heterosexual women. However, when we get to the review section there is an explosion of queerness: lesbian movies and books dominate the section.[vii] Queerness is very present but does not feature in any of the main content of the zine because of their particular heterosexual framing. In June 1992, Spare Rib published an experimental poem, 'Rush', in which the author discovered her queerness through the process of rushing a sorority.  However, on the page immediately following this is dominated by a cartoon of a frowning woman flanked by such statements as  'I am not a lesbian, I do not hate men, I do not prefer the term womyn', intended to imply that feminists are not their stereotypes.[viii] More than this, it implied that feminists were not their negative stereotypes, suggesting that its association with queerness was inherently damaging to the feminist cause.

The Influence of Politican Lesbianism

Within the personal essays, articles and journal entries of Dartmouth's feminists, one can chart the influence of feminists who wanted to remove the association between lesbianism and feminism, who, like Betty Friedan, rejected non-heterosexual feminism as a scourge or threat. One can also witness influences from the other side of the split, recognising ideas from lesbian radical feminist groups and separatist groups and discourse resulting from the anti-porn movement which placed a focus on lesbianism as a political choice which had its roots in the rejection of all things male.[ix]

Interestingly, the focus on these latter discourses came nearly exclusively from heterosexual women who considered themselves politically lesbian. In 1982, one self-identified heterosexual writer stated that she believed in Adrienne Rich's idea of a 'lesbian continuum', which considered all relationships between women to exist somewhere on a spectrum.[x] By 1988 the idea one could 'feel like' a lesbian, or have a lesbian mindset, even if one did not experience same sex attraction and desire, was very prevalent in the Dartmouth feminist community. An entry in July expresses this sentiment most clearly:

I feel my feminism came to a halt with my heterosexuality. … Mostly I want to be a lesbian. I need my best friend to be a ♀. But I don't feel the sexual attraction, right now at least. But when my best friend, my intimate partner, is ♂ there's a barrier.[xi]

These women focused on a superficial idea of sisterhood and all female community that wholeheartedly rejected men, yet Dartmouth women who defined themselves as lesbian, bisexual, and queer, outside of this specific political category were largely opposed to breaking away entirely from men in the ways political lesbianism advocated. They saw the advantages of retaining queer men as allies as something which greatly outweighed the benefits of cutting ties with them. One article, written by a lesbian student, stated that is only the ideal when it will profit women more to separate from rather than maintain contact with men. To separate all five or six of us "out" lesbian women on campus from the larger queer community would be detrimental to our mental and emotional wellbeing.  … We need queer men at Dartmouth. They are often more our allies than straight women.[xii]

There were a number of attempts to create an exclusively queer community, such as a campaign for queer affinity housing, but that did not gain traction at the time and was only recently implemented at Dartmouth.[xiii] Moreover, that campaigning was not identified as a feminist venture, and centred its aims around the academic pursuit of queer and gender studies and the bringing together of queer students for physical and emotional safety.

Queer feminism persisted, and queer women still participated in the Dartmouth Women's Association and Women's Issues League and contributed a small number of articles to the feminist publications. However, from the late 1980s into the 1990s their contributions were far more critical of heterosexual feminism. A final quote, from an Uncommon Threads article, sets the tone of this politics, wanting to engage with Dartmouth feminism broadly, but also feeling consistently betrayed by it:

Don't be afraid to be called a lesbian, a dyke, queer. These are not dirty words, these are my words, words that I love. … Try them on for size and see how the world reacts to you. Then, and only then, can you really say you've tried to make this world more comfortable for me.[xiv]

What we see happening in Dartmouth is the reception of these broader discourses surrounding mainstream feminism and queer feminism - ideas of political lesbianism and of separatism - being brought into a very specific institutional and social context, and that context shaping their reception. These notions of feminist survival and queer survival are particularly pertinent as they foreground the difficulty of sustaining activism within a hostile environment. Institutional intransigence and deep-seated misogyny produced a climate intensely hostile to any kind of feminist organising.  As a direct result of how difficult it was to fight against this hostility, coalitional and intersectional politics failed whilst hegemonic, heterosexual feminism prevailed. This raises important points, both for the historical study of this period of feminism and for queer and feminist student activism today. The need to fight against the homogenization of students as a singular group and to understand how nuanced and complex the feminist issues that arise on campuses can be, particularly for those who face numerous forms of oppression, can never be achieved without fully understanding the unique institutional pressures of student activism.

Rich, A.  'Compulsory Heterosexuality and Lesbian Existence', Signs: Journal of Women in Culture and Society, 5/4 (1980) 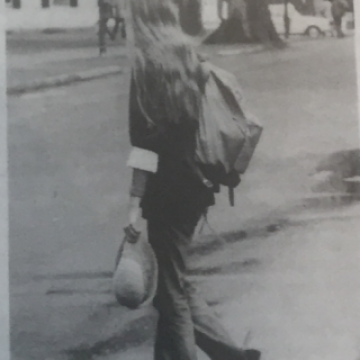