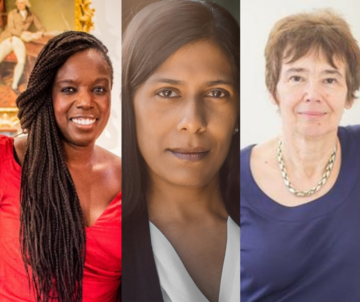 We are delighted to celebrate the work of some of the people we have connected with at TORCH who have been recognised in the Queen’s Birthday Honours this year for their outstanding work in both academic and creative fields.

Nadine Benjamin has been awarded an MBE for services to opera. Benjamin has performed at the English National Opera, the Royal Opera House, and the BBC Proms, amongst others. She is also developing great renown as an exponent of song, and her upcoming concert for TORCH with Nicolle Panizza will showcase their work together on American art song, a form of classical music usually written for one voice and piano accompaniment.

Find out more about the concert here.

Lolita Chakrabarti has been awarded an OBE for services to drama. Chakrabarti is an actress and playwright, and has received wide acclaim for her adaptation of Life of Pi, as well as her sell-out show earlier this year, Hymn. TORCH was honoured to host Lolita as a Humanities Cultural Programme Visiting Fellow this term, during which time she held a masterclass and Q&A for early career theatre makers, as well as reflecting on her career and work in a public talk.

Watch In Conversation with Lolita Chakrabarti below:

Professor Sally Shuttleworth has been awarded an OBE for services to the study of English Literature. Shuttleworth researches the intersections of literature, science and medicine, and has been Principal Investigator on projects including Diseases of Modern Life: Nineteenth-Century Perspectives and Constructing Scientific Communities: Citizen Science in the 19th and 21st Centuries. Her work with TORCH includes a public light display as part of the Diseases of Modern Life project, and the timely Contagion Cabaret, an irreverent historical look at lockdowns, plagues and pandemics.

Watch the light display below:

Watch The Contagion Cabaret below:

We congratulate and thank all those who received recongition this year, and all those who contribute to the broader intellectual and cultural impact of the University.