With the start of the new academic term, came the end of Professor Philip Bullock’s three-year term as the Director of TORCH. Like many things in life, the three-years went by swiftly as we enjoyed working with such an excellent, kind and considerate colleague.

Leading by example as a naturally collaborative individual and researcher, Philip shared his knowledge generously with everyone. He brought his music and performance collaborators together and into the TORCH community, and supported many researchers and external partners during his time as Director. His advocacy and support for diversity and inclusion were one of the many reasons Philip was an excellent Director for TORCH, as he continued and built on the work of the first two directors (Professors Stephen Tuck and Elleke Boehmer) and the TORCH team and community.

From 1 October 2020, the new Director of TORCH will be Professor Wes Williams. Wes has been involved in TORCH related activities for many years, including his Knowledge Exchange Fellowship and before taking on the role of TORCH Director, he was Knowledge Exchange Champion of the Humanities at Oxford. He brings with him a wealth of experience in many areas, and a long-standing interest in fostering cultural collaborations and exchanges that amplify, diversify, and transform our collective intellectual and social resources

“It is hard to believe that Philip’s time as TORCH Director is now up, so central has he been to our collective endeavours over the past few years. Building on the foundational work of TORCH’s first two Directors, Stephen Tuck and Elleke Boehmer, Philip brought leadership, advocacy, and clear strategic thinking to the role, as well as panache, joie de vivre and a certain je ne sais quoi. The further flourishing of TORCH’s capacity to sustain and develop the research of colleagues both within the university and internationally is testament to his energy and his generosity.

TORCH’s recent focus on performance in its myriad and complex forms has also paid rich dividends, not only in the generation of new research, but also in enhancing and promoting public understanding of the work we variously do in the Humanities in Oxford. Philip leaves TORCH in fine fettle and shining brightly, despite the many challenges of the current moment. Happily, we will not altogether lose him, as he has generously agreed to continue to contribute his energy and his wisdom to the developing Humanities Cultural Programme over the next few years.”

We are also pleased to welcome Professor María del Pilar Blanco in a new role as TORCH Academic Champion for Networks and Partnerships. María is a longstanding contributor to TORCH activities, most recently hosting the Puerto Rican novelist, Eduardo Lalo, as a TORCH Global South Visiting Fellow. 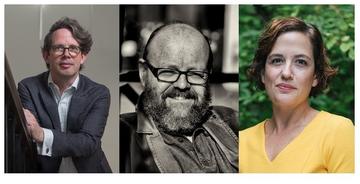