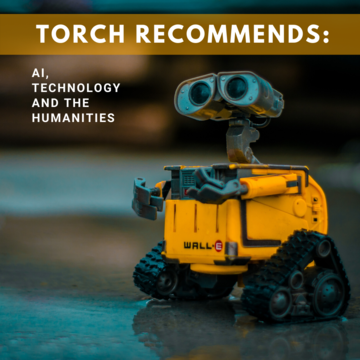 This week, the TORCH team put our heads together and came up with a list of our favourite podcasts, books, movies and TV shows centred around the theme "AI, Technology and the Humanities." We hope you enjoy our recommendations! Do let us know what you think of them.

This brilliant tale follows Bounty Hunter Rick Deckard, whose job is to 'retire' renegade androids who have escaped from the outer colonies.

This book is a must-read for anyone interested in how the aggregation and use of 'big data' has replicated and codified gender inequalities. (Anbara)

This podcast series explores the hidden stories behind design, architecture, and technology. A recent favourite is 'The Worst Video Game Ever' which follows the urban legend of the E.T video game which was deemed so terrible it was buried in the desert. (Anbara)

This is a brilliant podcast that brings interesting and sometimes difficult science topics to the public. Professor Brian Cox brings the science while Robin Ince brings the humanities and together it makes for an amusing yet accessible listen. With a great range of topics (Are We Living in a Simulation?, Dinosaurs, and a fun Astronaut Special), you would be hard pressed not to find an episode centred around one of your interests. There are a number of episodes about AI, such as this excellent one. 10/10, would recommend. (Nikki)

Based on the 1973 film of the same name, Westworld is a brilliant and intoxicating HBO show. The story takes place in Westworld, a hyper-tech Wild-West themed amusement park populated by android “hosts” whose sole function is to entertain the high-paying “guests”, who may indulge in their wildest and most depraved fantasies. The AI hosts are programmed not to harm humans. While not without its flaws, Westwork is an intelligent and enthralling drama, providing us with a glimpse of a dark and potential future. (Jean)

Ex machina is a brilliant science fiction film starring Domhnall Gleeson, Alicia Vikander and Oscar Isaac. The story centres around a programmer who is invited by his CEO to administer the turing test to an alluring humanoid robot. The movie is a highly engaging, stylish and carefully-crafted piece of science fiction. It is something of a horror movie, and Alicia Vikander is a stand-out star. As the robot, she is convincing, beguiling and terrifying. (Jean)

An enthralling cyberpunk web television series, Altered Carbon is based in a world where human consciousness, in the form of “stacks” can be transferred between different bodies, known as “sleeves”. Takeshi Kovacs, a former soldier turned investigator is “spun up” from “ice” in order to solve a murder. (Jean)