The TORCH team came up with a list of our favourite podcasts, books, movies and TV shows centred around the theme "Peace and Conflict." We hope you enjoy our recommendations! Do let us know what you think of them, or if you have any recommendations yourself. 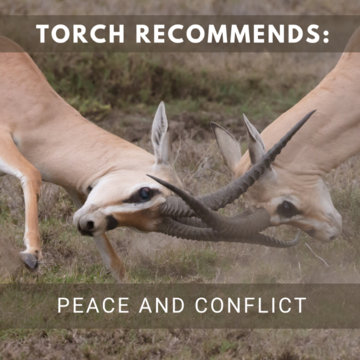 This podcast series is hosted by two Arab-American friends who discuss Middle Eastern politics, news, and history, and break down the immigrant experience. (Anbara)

A classic for a reason. This novel is a fictionalized account of Siegfried Sassoon's treatment in a psychiatric hospital during WWI. Powerful and beautiful. (Anbara)

A utopian world where art rules the world and all ends in peace—or does it? (Justine)

Book: All Quiet On The Western Front, by Erich Maria Remarque

All Quiet on the Western Front is an incredible and horrific account of the First World War, written by a veteran himself. The book’s central character Paul Bäumer begins as a young, naive soldier, enthusiastic about the adventure of war. The book and its sequel, The Road Back (1930), were among the books banned and burned in Nazi Germany. (Jean)

The Kite Runner is a thoroughly heart-wrenching tale of fractured childhoods, the flight of refugees, the Soviet invasion of Afghanistan in 1979, and the rise of the Taliban. (Jean)

Suite Francaise is the title of a planned sequence of five novels by Irène Némirovsky, a French writer of Ukranian Jewish descent. Némirovsky was arrested in July 1942, having just completed the first two of the series, and sent to Auschwitz, where she died. Her two books and her notebook, published after the war, tells the story of the German invasion of France. Némirovsky knew the ending of her series was less than certain, writing in her notes "It's really in the lap of the gods since it depends on what happens." The planned fifth book, never written, was to be titled "La Paix" or "Peace". (Jean)

Maus is a stark and sobering graphic novel by American cartoonist Art Spiegelman, serialized from 1980 to 1991. The story revolves around Spiegelman interviewing his father about his harrowing experiences as a Polish Jew and Holocaust survivor. Jews are depicted as mice, Germans as cats, and Poles as pigs. I studied this book in high school and it was both an incredible and an appalling read. (Jean)