In October 2019, the CLASP project ran two connected academic events: a Graduate Training Day in Old English Metre, followed by a one-day workshop on the theme of ‘Anglo-Saxon Metre and Literary Studies’. These events drew attendees from across the UK, Europe and America, who gathered to share work on the theory, teaching and research of Old English and Anglo-Latin metre.

On the morning of the Graduate Training Day, Rafael Pascual delivered a crash course in the scansion of Old English metre to an assorted group of undergraduate and graduate students, and staff. In the afternoon, he and Rachel Burns facilitated a series of exercises in which attendees were tested on the morning’s work, before applying their new knowledge to practical questions of textual criticism. This included a guided introduction to working with the texts in their manuscript contexts from Robert Fulk, plenary speaker for the next day’s workshop. The final event of the day saw the CLASP team and scholars of Old English metre lead a round table discussion on questions of teaching and research.

Many of the Training Day attendees returned for the following day’s workshop, which took place in the imposing Chapel of the Radcliffe Observatory Quarter. Andy Orchard and the CLASP team presented on their work for the project, before welcoming scholars to discuss Old English and Anglo-Latin metrical studies from a range of perspectives. Papers touched on questions of metrical standards, deficiency and emendation (Jane Roberts, Caroline Batten, Nelson Goering), close reading of metrical features in the style of Old English poems (Megan Hartman, Mark Atherton), the interface of metrical and manuscript studies (Simon Thomson) and metre as a field of study (Hal Momma). Q&A sessions lead to fruitful and excited discussions of the ideas and challenges raised by these papers, and participants were able to continue these conversations over a conference dinner.

The generous support of Oxford Medieval Studies Small Grants HT, alongside support from the CLASP project and the Oxford English Faculty, enabled these events which we hope have inspired new work in metrical studies, and a new generation of metrical scholars.

I felt empowered to go out and scan Old English poetry independently, and to be much more confident in using metricity productively in my own literary analysis – Tom Revell, Balliol College, University of Oxford

I had not imagined metre could be so much fun! – Eleni Ponirakis, University of Nottingham 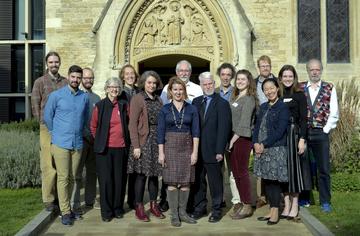