Training Health Professionals to Use the Arts

This term, Early Career Fellow Stella Botchway teamed up with the Public Health Foundation of India (PHFI) in New Delhi to deliver an arts based course for public health professionals. The course was part of the Foundation's 'Public Health and the Arts' initiative and was supported by PHFI and the Wellcome Trust.

The aim of the course was to explore the many ways in which the arts can be used within the practice of public health. The course intended to expose health researchers and government health officials in India to the relationship between the arts and public health, and featured the work of performing artists which has led to widespread engagement and health communication.

Stella was asked to share the work she had been doing at TORCH and bring a theoretical underpinning to the initiative. Stella has been looking at how research can support initiatives using films for public good, and how such initiatives can be robustly evaluated.

India has a strong tradition of using the arts for health and wellbeing. Unlike the UK, their society, has well-developed concept of 'holistic' health, and the link between and individual's surroundings, community, culture and the potential for health is central to public life. They also have a strong sense of the value of art forms as a means to make sense of life, and be a catalyst for positive societal change.

The course showcased a fantastic array of initiatives that are harnessing the power of the arts to change people's lives. It was conceived by Dr Kartik Sharma, a public health professional leading the Public Health & the Arts Unit at PHFI. Dr Sharma has been involved in creating audio visuals from narratives of arthritis and osteoporosis patients, leading to an international public engagement award from the Wellcome Trust. Kartik also has an active involvement in film, television and the Theatre as a writer and performer.

The course featured Dr Mallika Sarabhai, a national figure in India, who has won the hearts of audiences for over 45 years through her career as a dancer, TV personality, activist and political advocate. Dr Sarabhai spoke about the impact of her company, the Darpana Academy of Performing Arts, which uses dance, theatre, television and film to tackle inequalities within health and society. Her work engages audiences to further societal education and women's empowerment.

Attendees were treated to a puppet show by the Happy Hands troupe, from the famous Kathputli Colony of New Delhi. Traditional Kathputli puppetry is thought to be over two thousand years old, and as an art form has a historical role in disseminating messages of health and wellbeing. The Happy Hands group is remarkable in that they are entirely made up of women, despite puppetry being traditionally a man's profession. These women come from disadvantaged backgrounds, and are using their newfound craft to improve their communities whilst supporting themselves and their families.

The group also heard from Anika Singh at the Non-Communicable Disease team from the Regional South-East Asia Office of the World Health Organisation. Anika's team have been experimenting with animated videos in order to engage the public on challenging health topics. They have also been exploring how short videos can be used to influence policy makers at regional, national and international levels.

The award-winning Immunization Technical Support Unit from the Universal Immunization Programme of the Government of India shared how their social marketing campaign 'Mission Indradhanush' used film and social media to invigorate the full vaccination of every child in India.

The course was used to increase the confidence of Indian public health academics and government officials in using the arts when disseminating research findings and communicating with populations about health. The theories and frameworks developed at TORCH were used to support this approach, and build capacity in the workforce in designing and evaluating their own arts-based public health interventions.

The course was extremely well received, and demonstrated an appetite for more initiatives that incorporates the arts within the practice and science of public health. 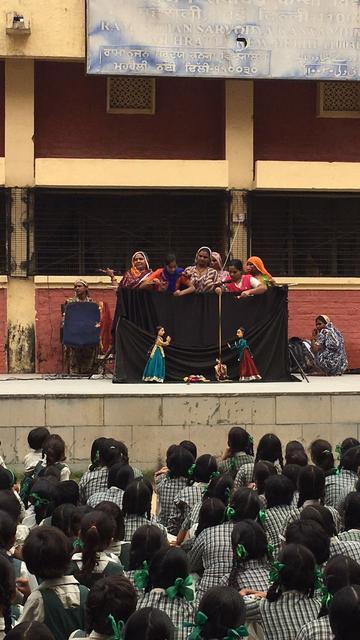