Two reflections on 12 Years a Slave

Two reflections on 12 Years a Slave

In Toni Morrison’s well-known novel about slavery, Beloved (1987), the female protagonist Sethe is distinctive as the ‘one who never looked away’ from the acts of violence she routinely encountered.  I have been struck by the recurrence, in the discourse surrounding 12 Years a Slave, of both critics and ‘ordinary’ viewers expressing their sense that they ‘could not watch’ some of the violence depicted in this film – that they had to avert their gaze. Mark Kermode epitomizes this response in his Observer review, in which he asserts that he ‘looked away more than once’. There are of course horrific scenes in the film, including the attempted lynching of Solomon Northup; the whipping of Patsey; and her horribly quiet rape at the hands of Epps. But there is nothing gratuitous here; lynching and whipping and rape were standard weapons in slavery’s arsenal, as most people already know.

Let’s not forget, as well, that this film is only certificate 15; there are, in fact, many much more violent films. So the common response, ‘I could not watch it’, begs a question about what exactly are we not wanting to see. Is it the specifics of these violent acts, or is it the extent of the brutality that characterized the slave economy?  I once attended a reading by Toni Morrison at which a reader claimed the acts of violence that the novelist described were ‘too terrible to read’ – ‘I just could not read them’, she said. ‘Oh, you can read them’, was Morrison’s vehement response. ‘People had these things done to them, they experienced them and they survived them. The least we can do’, she pointed out, ‘is to write them, and read them, and talk about them’. So let’s not look away. To make us look, and to see, is surely the whole point of this film.

Much of Solomon Northup’s moral indignation in this film, and hence the moral indignation of the film itself, is rooted in the fact that he was not born a slave – that he has been kidnapped from his life as a free, upstanding, productive and economically self-sufficient American family man. In 1853, when the historical Solomon Northup published his narrative, Twelve Years a Slave, this particular protest was in line with a key abolitionist strategy, exemplified by Harriet Beecher Stowe, that slavery was wrong not because it was an absolute injustice, an indefensible violation of universal human rights, but because it corrupted American ideals, American morality, and American family life. A century and a half later, however, in a very different historical context, the film’s emphasis on the contrast between Northup’s free and enslaved lives, its reiteration of the idea that he should not be enslaved because he was not born into slavery, is a risky one.

Obviously to be born into slavery, to have never lived a free, self-sufficient and emotionally fulfilled life does not justify the system, and nor should it provoke our moral indignation less. Yet when Northup is reunited with his family at the film’s end we feel happy, the sentimental music plays, and we feel relieved that somehow justice has been done. In 1853, the fact of Northup’s rehabilitation meant something very different from what it should do now. Those born into slavery, who could not read and write, who had never and would never know freedom, were still in that field at the moment of Northup’s rescue. Should it not be they, rather than this film’s far less unfortunate protagonist, who linger in our memory? 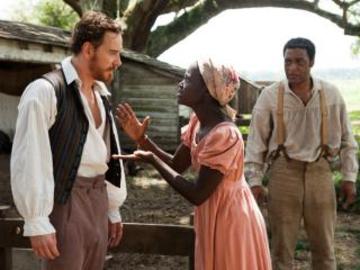