This blog post was originally published in German by Dr. Martin Faass and can be found here: http://blog.liebermann-villa.de/jewish-country-house-2018/

On 5-6 March 2018, a conference on "Jewish Country Houses" was organized in Oxford, hosted by the University of Oxford and the National Trust. Invited were scholars from England, the USA, Germany, Austria, Spain, and Italy as well as curators of well-known "Jewish Country Houses" from all over Europe. The Liebermann Villa on the Wannsee was included as one of these. The organizer, Abigail Green, a professor of European history at the University of Oxford, had already contacted me last year and invited me to introduce the Liebermann Villa in the Curating the Jewish Country House panel , I gladly accepted this invitation,

The Country House is a typical English affair as a representative estate of the landed gentry and upper middle class bourgeoisie. In the course of industrialization in the 19th century and the economic success of bourgeois entrepreneurs emerged a financial ‘nobility’ with great political influence, which included many Jews. In most European countries, it was not until this time that it became possible for Jews to become citizens and acquire property. The new money nobility wanted to copy the old-established nobility through the purchase, or the construction of a summer house to document their claim to social leadership. As one of the first influential Jewish families, the Rothschild family set standards here. Baron James de Rothschild, one of the richest Frenchmen of his time, built the Ferrières Castle in Ferrières-en-Brie around 1855 by the English architect Joseph Praxton, a huge château in the style of Louis VI. to build. This style was also used for subsequent new buildings of the international financial nobility as an expression of their social claim to power.

The first day of the conference was dedicated to the two groups of villas and country houses: 1. houses bought by enobled Jewish entrepreneurs, such as Gunnersbury Park or Torre Alfina, and 2. those that were new, like the castle of Ferrières. In connection with the first group, Martin Sabrow from the Center for Contemporary History Potsdam spoke about the purchase and restoration of Schloss Freienwalde by Liebermann's cousin Walter Rathenau, while Mimi Schmidt from Jindal Global University, India spoke about examples of Jewish summer houses in Austria. Special attention was again given to the model character of 18th century French architecture. A basic question that was repeatedly raised but could not be answered conclusively was: What makes a Country House a Jewish Country House? And: Can there ever be a specific type of building that can be called that? However, the scholars present agreed that throughout Europe the country house played a decisive role in the attempt to integrate and assimilate Jews into the social upper classes.

The second day of the conference took place in one of the most outstanding examples of a Jewish Country House, Waddesdon Manor, a French-style chateau built by Ferdinand de Rothschild in Buckinghamshire between 1874 and 1889, now part of the National Trust. After a one-hour bus tour, two members of the National Trust led us through the house, which has many treasures and outstanding paintings. Equipped with such impressions, the conference then continued in the Powerhouse, the building's historic technical center. Now the topic "The Jewish country house as a museum" was on the program. In addition to colleagues from England and France, I had the opportunity to introduce the Liebermann Villa am Wannsee. The history of the Liebermann villa, its rescue through private initiative and the close connection between gardening and painting left a great impression on many conference participants. The director of the European Association for the Preservation and Promotion of Jewish Culture and Heritage, Assumpció Hosta, was so enthusiastic that she invited me to read the history of the Liebermann Villa in September 2018, to be presented in Barcelona during the European Days of Jewish Culture 2018. 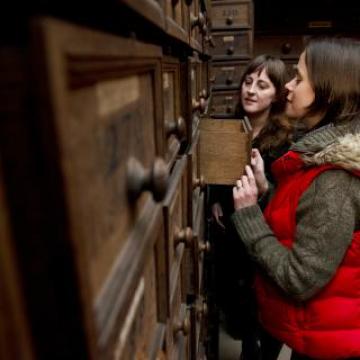