This year’s Oxford-Weidenfeld Translation Prize shortlist has just been announced. The Shortlist includes eight books from an outstanding entry of over a hundred titles in translations from 22 different languages.Once again we had impressive submissions from both larger and smaller publishing houses. The shortlist contains translations from eight languages.

The winner will be announced at the prizegiving and dinner at St Anne’s College, Oxford on Saturday 15 June 2019. This is the crowning event of Oxford Translation Day, which boasts a varied programme of talks, workshops, and readings. Details are available at: http://www.occt.ox.ac.uk/oxford-translation-day-2019.

Jón Kalman Stefánsson, About the Size of the Universe, translated from the Icelandic by Philip Roughton (MacLehose)

Gaito Gazdanov, The Beggar and Other Stories, translated from the Russian by Bryan Karetnyk (Pushkin Press)

Christine Marendon, Heroines from Abroad, translated from the German by Ken Cockburn (Carcanet)

Mario Benedetti, Springtime in a Broken Mirror, translated from the Spanish by Nick Caistor (Penguin)

Mbarek Ould Beyrouk, The Desert and the Drum, translated from the French by Rachel McGill (Dedalus)

This week we were enthralled by the Weidenfeld lectures at St Anne’s. The 2018-19 Weidenfeld Visiting Professorship is held by the highly-esteemed Durs Grünbein. Durs will next be lecturing on Tuesday and Thursday of 4th week at 5.30 pm, Tsuzuki Lecture Theatre. For further details, see our events page. On Monday, the Discussion Group explored Uyghur literature, kindly introduced to us by Rahima Mahmut. 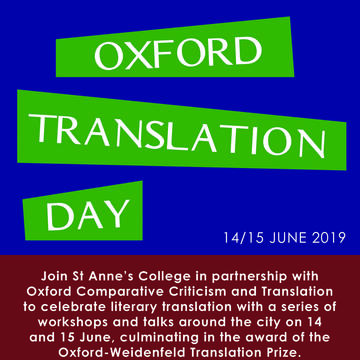