What happens when AI meets Shakespeare?

A collaboration between Professor Abigail Williams, Faculty of English and local games company To Play For.

In February 2019, at the first Humanities workshop with the Creative Industries, Professor Abigail Williams began a conversation with Annette Parry, COO of Oxford-based games company To Play For. To Play For have developed an Artificial Intelligence storytelling platform called Charisma.ai, which uses the form of a chatbot to enable interactive engagement with a narrative.

AI storytelling: how does it work?

Through the platform Charisma.ai, the player can become a character in a story, and shape different outcomes depending on their verbal responses. The platform uses machine learning to interpret not only language, but also various kinds of emotional register, identifying whether the player’s response indicates anxiety, fear or anger. It uses this interpretation to generate different pathways through the story.

We often say that Shakespeare is ‘for all time’, but the reality is that for many modern school students, who begin to study the plays at Key Stage 3, the language of Shakespeare’s texts can be challenging. It can make the plays feel alien and inaccessible – but the storytelling platform allows for genuinely interactive engagement with a play, creating new levels of empathy and understanding.

Using two scenes from the most commonly studied plays, which represent key moments of indecision or possible deviation in the plot (the fight scene in Romeo and Juliet and Macbeth’s encounter with the witches in Macbeth), the AI takes the form of a WhatsApp chat to involve the player in dialogue with the characters. What decisions would they make at that crux point? Why does the action follow as it does? What motivates Macbeth or Mercutio to act as they do? The player can effectively ask the play to explain itself, and challenge characters to behave or respond in particular ways.

Initial feedback has shown that students using the platform feel involved with the action, and its consequences, in ways that they do not with the text alone. The next stage involves testing in Autumn 2019 with potential users (year 7–9 students and teachers).

For more information contact Professor Abigail Williams or Annette Parry, COO of To Play For. 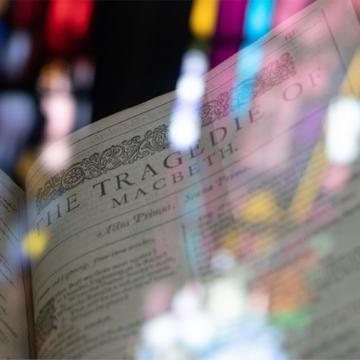