"When The Crickets Hesitate" - WINNER of the Over 18 Category, the TORCH Humanities and Science Essay Competition

When the Crickets Hesitate

“Silence and a deeper silence When the Crickets Hesitate.” – Leonard Cohen

The sense of ending

Over the past decade, epidemiologists and experts have long warned of a possible pandemic, recognizing that our health systems were poorly prepared to endure one. All evidence now indicates that the current health crisis will deepen the economic insecurity and social inequalities we have long lived with. Despite all precautions, actions to anticipate and mitigate our exposure to these risks were often delayed, with governments hesitant to make decisions.

In spite of international efforts, advances in science and technology, and the actions of non-profit organizations, greed continued to industrialise. A growing body of research shows that humanity’s destruction of biodiversity has, in addition to its impact on livelihoods, income, local migration and political conflict, created the conditions for new diseases to emerge. Hunting, deforestation, pollution, the conversion of uncultivated areas into pastures, the illicit trade of wildlife as well as climate change have made life difficult for many animals. By reducing the natural barriers between host animals and ourselves, we make it easier for diseases to loosen from natural hosts and can easily leap to humans.

Disease ecologists argue that viruses and other pathogens are likely to move from animals to humans in the many informal markets that have sprung up around the world and where animals – sometimes wild – are slaughtered, cut up and sold on the spot to provide fresh meat to fast-growing urban populations.[i] They make possible the unusual encounters which facilitate the cross-species transmission of pathogens.

Experts have called for more global scientific cooperation.[ii] An emerging discipline, planetary health, focuses precisely on the increasingly visible connections between on the one hand the well-being of humans, other living things and the state of entire ecosystems, and on the other hand, the protection of the environment. Although this comprehensive approach is relatively recent, it is grounded in decades of scientific research into the impact of human activity. Environmental science, pioneered by American marine biologist and writer Rachel Carson, studies the variety of life systems and natural processes that occur (soil science, ecology, climatology, vegetation cover, marine and freshwater systems, and agriculture and land use) and how humans affect them. It is about everything that surrounds us and its preservation.[iiiiv]

In the early 60s, Rachel Carson published a book called Silent Spring, which struck a chord not only in academia, but also in the minds of the public. Initially, she faced a deluge of reactionary opposition to the fruit of ten years of ecological research. It was not long before her vision of the ecosystem inspired a nationwide environmental movement which would go on to spread to the entire world.

Carson was among the first women to receive a scholarship for postgraduate studies in science and biology. In 1936, she became the first woman to apply for a position at the U.S. Bureau of Fisheries. Carson skilfully managed to overcome the entrenched patriarchy, rising to become the agency’s editor-in-chief over the course of a fifteen-year career. After leaving the civil service, she dedicated herself to the conservation of nature and was among the first environmentalists to observe and give voice to concerns about the poisoning of the environment by industrial production.

Despite living in an era defined by a booming economic recovery based on the unassailable ideology of consumerism and underpinned by altered agricultural processes, Carson advocated a holistic approach to the understanding of the world around us. For decades, the US government sprayed dichloro-diphenyl-trichloro-ethane (DDT) to control mosquitos in coastal areas, and farmers used it for its insecticidal properties. Scientists observed that when it rained, DDT would wash off the soil into the waterways, where it was absorbed by aquatic plants and animals. Although the pesticide allowed farmers to produce food in a very efficient manner, this productivity came at the expense of birds’ and insects’ ability to survive and reproduce, causing entire populations to disappear.[v]

This little bird that somebody sends 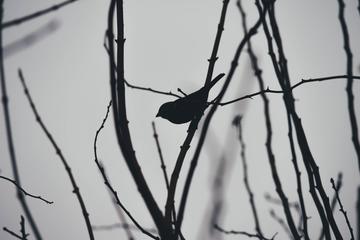 Born in 1907 in the river town of Springdale, Pennsylvania, Carson inherited a deep love of nature from her mother, who nurtured and encouraged her curiosity and love of language. She possessed a rare combination of gifts: a brilliant marine biologist investigating water pollution and a sensitive writer whose prose was exquisite in its lyricism and sincerity. Her scientific research was dedicated to understanding this invisible poison which had silenced the woods and pastures in her hometown and beyond: “DDT is now so universally used that in most minds the product takes on the harmless aspect of the familiar,” she wrote. Carson arrived at a simple conclusion: powerful insecticides such as DDT were harmless; in fact, they were poisoning food chains, from insects all the way up to humans.

When Silent Spring was published in 1962, it became a national bestseller. Carson became the focus of controversy overnight, receiving numerous attacks on her professional integrity. Her scientific methods were questioned. The July 22nd New York Times headline read: “‘Silent Spring’ is Now Noisy Summer.” By September, Carson became caught up in politics, and when President John F. Kennedy convened a commission to review the government’s pesticide policy, she was urged to testify before the congressional committee and discuss the authenticity of her claims. The hearings resulted in the establishment of the Environmental Protection Agency, and, on December 31st 1972, eight years after her death, the agricultural use of DDT was banned. She stood behind what she had written, which was an act of courage, especially throughout that long, noisy “now”.

On June 9th 1980, Carson was posthumously awarded the Presidential Medal of Freedom, the highest civilian honour, by President Jimmy Carter, who said of her:

“Rachel Carson fed a spring of awareness across America and beyond. A biologist with a gentle, clear voice, she welcomed her audiences to her love of the sea, while with an equally clear determined voice she warned Americans of the dangers human beings themselves pose for their own environment.”[vi]

Silent Spring remains one of the most effective denunciations of industrial malpractice ever written and is widely credited with raising ecological awareness across the US, Europe and beyond. Carson’s message succeeded because it was about human deliverance, rather than about nature alone. Her rhetoric artfully awakens the inborn sense of wonder in her readers. Her legacy is a compelling example of the power of the individual to bring about change. Many present-day grassroots movements trace their origins directly to Silent Spring. Doris Lessing said of her: “Carson was the originator of ecological concerns.”

“The ‘control of nature’ is a phrase conceived in arrogance, born of the Neanderthal age of biology and philosophy, when it was supposed that nature exists for the convenience of man. The concepts and practices of applied entomology for the most part date from that Stone Age of science,” Silent Spring.

Our present crisis, like all previous ones, strikes our most vulnerable the hardest. Like climate change, the pandemic exacerbates inequalities. Access to health care and basic income are not evenly distributed around the globe, while the virus hits everyone equally hard.

The crisis response could yet yield positive effects on society, as it provides an opportunity to rethink our collective behaviour. Most probably, the temptation to uphold the status quo and to continue to fund our lifestyles at the expense of the planet and its limited resources will remain appealing. This time, the price of maintaining the false mastery over nature will be too high. In The Plague, Camus writes: “The only way to fight the plague is with decency”, the same decency Carson asked for over half a century ago. It takes a village, sometimes a country or a global community of shared effort to get there.

“Through all these new, imaginative, and creative approaches to the problem of sharing our earth with other creatures there runs a constant theme, the awareness that we are dealing with life–with living populations and all their pressures and counter-pressures, their surges and recessions.”

These surges and recessions are ours too.