In coming to terms with a difficult, often haunting past, what part can novels and memoirs play? How should we regard the role and positions of those who write them? Does it make a difference if an author refers to first-hand experiences and personal memories in their writing instead of being generationally, geographically, or culturally removed from the events? Can literary writing ever be adequate to the task of witnessing? These were some of the questions addressed at the launch event of the Mellon-Sawyer Seminar Series, Post-War: Commemoration, Reconstruction, Reconciliation, which took place on Friday 20 October in Oxford. During the event, acclaimed novelist and memoirist Aminatta Forna, OBE, engaged in an insightful conversation with Elleke Boehmer, Professor of World Literature at the University of Oxford.

Their conversation oscillated between theoretical discussions of witness literature, Forna’s personal stories and narratives, and short readings from her four books, The Devil that Danced on the Water (2002), Ancestor Stones (2006), The Memory of Love (2010), and The Hired Man (2013). Hearing and contrasting extracts from her first and last books stimulated thought-provoking dialogue regarding the question of an author’s positionality and accountability, derived from whether they are telling their own or someone else’s story.

In Forna’s first book, which is an autobiographical account, she moves from intimate memories of a child torn between her Sierra Leonean and Scottish heritages to an investigation into her father’s arrest and subsequent execution on trumped-up charges of treason. In so doing, Forna effectively juxtaposes the ‘memories of a child’ with the ‘deceit of a state’. Forna now considers herself to be a writer of witness literature, but she had not regarded herself as such when she began to write. In her own words, in The Devil that Danced on the Water, she simply wished to offer a narrative that was an alternative to the official narrative of the Sierra Leone dictatorship, according to which the president was a hero and Forna’s father a traitor. Her book arose as an active effort to reconcile with this difficult past, both in private and public terms, through an act of literary witnessing.

In her latest novel, she moved from Sierra Leone to an ostensibly different setting, that of post-civil war Croatia. When asked about her reasons for choosing the former Yugoslavia as the setting for this novel, she replied that she writes about what she wants to understand. Through The Hired Man, Forna wanted to understand what was similar and what was different about the civil wars in

Sierra Leone and Croatia. She traced many similarities between the two countries but, for her, the main difference between them lay in the response to post-war reconciliation. In Croatia, the troubling memories of neighbourly atrocities are being silenced. In such conditions, novels written by an outsider can function as imaginative witnessing and act effectively as commemoration.

Forna is convinced that writers can write beyond their own experience. As she explained, novelists bring what she calls ‘the seventh sense’ of imagination to witnessing; they bring interiority and try to make sense of what has happened. The narratives they construct aim at a different kind of truth than the literal truth which comes in the first line of witness testimonies. This discussion of the impact of the relationship between form, content, and the persona of the author was, for me, the most compelling.

You can watch the full conversation on our podcast series.

DPhil candidate in Social and Cultural Anthropology, University of Oxford 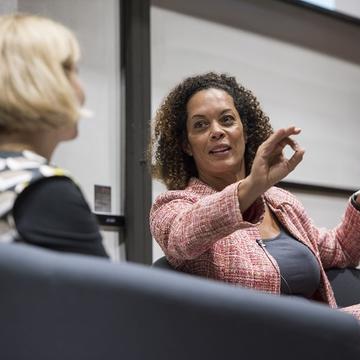