Women and the Canon: An Interdisciplinary Conference

Back in the summer of last year, planning was underway for a small study day, ‘Women and the Canon’, focussing on the intersections between gender and cultural authority. Julia Hartley, Adele Bardazzi, Natalya Din-Kariuki and I had sent out the call for papers and we were waiting with baited breath for the proposals to come in. And they kept coming in. At the final tally we had received over one hundred abstracts and as we set about making our selections, the high quality and number of proposals made it clear that we could, indeed should, hold a much larger event. As the conference grew in scope, into a two-day event with parallel sessions, we were grateful for the funding that was provided by a range of sources, the Italian Sub-Faculty and ICI Berlin fund, the English Faculty, Christ Church, the KE Seed Fund, and the AHRC-TORCH Graduate Fund.

The range of contributions was engaging and provocative, from Elena Lombardi’s opening keynote on medieval women readers, via papers on early modern anthologies, modern art, music, and the presence (absence) of women in syllabi and curricula. We were all struck by the real sense of collaborative effort which emerged through the conference discussion, as researchers and artists spoke directly to the key questions gathered under the heading ‘Women and the Canon’ from their various disciplinary backgrounds. Common ground was found for exchange between social scientists and art historians, medievalists and musicians, and many of us left not just with new ideas, but with plans of action, considerations for new syllabi and new ways of going about our work.

Thanks to the KE Seed Funding we were also able to incorporate artistic responses as part of the conference discussion, with work by Sara Masinaei (visual artist) and Helen MacKinnon (composer), who probed the conference themes with their artistic work and presentations.

The Graduate Fund helped to ensure that everyone was kept well-fed and the conviviality of our shared meals allowed the conference conversations to roll on through lunch breaks and over dinner, to great effect. 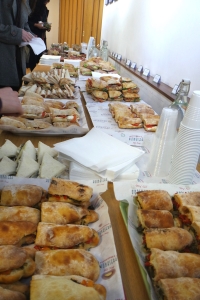 Looking back on the conference now, we’redelighted and proud of the discussion that took place and we have been prompted to keep that discussion going through our TORCH Network, co-funded by the Balliol Interdisciplinary Institute, ‘Gender and Authority’. With this venture we continue on the cross-disciplinary course of the original conference, bringing together researchers from different fields, institutions, and career stages to continue thinking critically about the role of gender and authority in texts, artefacts, disciplines, and societies.

Our next Gender and Authority event will be a seminar on 1 June 2016 at Somerville College, with Lynn Ellen Burkett (Western Carolina University) and Alexis Brown (University of Oxford). 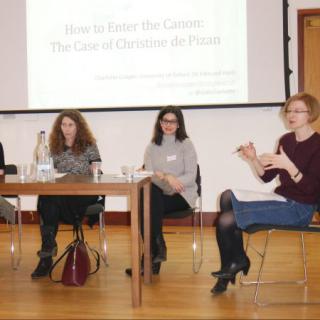