Women’s Responses to the Reformation

The TORCH Women in the Humanities-sponsored workshop, Women’s Responses to the Reformation took place in Oxford on 23rd June 2016. We welcomed around twenty participants from a variety of UK institutions, and our keynote speakers, Professor Sara Smart and Professor Ulrike Strasser, joined us from the University of Exeter and UC San Diego respectively.

Edmund Wareham, one of the organisers, opened proceedings with an outline of our rationale:

In the build-up to the 500th anniversary next year of the publication of the 95 Theses, and when every second Call for Papers seems to be about the Reformation, why the need for this topic in particular? … We’ve been fortunate enough to receive support from Oxford’s Women in the Humanities Fund which aims to bring together scholars from across humanities disciplines to promote research related to women’s lives, identities and representations. This can be seen in part by the background of the speakers as we welcome historians, modern linguists, English scholars and theologians. And it can also be seen in the theme of today’s discussion. As Merry Wiesner-Hanks has recently observed, the whole host of writing on women’s responses to the Reformation in the last thirty years is no longer interested in the black-and-white question of whether the Reformation was good or bad for women but rather has stressed difference and diversity, both in the questions which the Reformation posed and how women responded to it. We hope the programme today reflects such diversity: noblewomen, nuns and mothers; Germany, Denmark and the Pacific Ocean; Lutherans, Calvinists and Anabaptists; prophecies, prayerbooks and printing; above all recipients and participants. For I think a cursory look at the titles of our papers today shows how women were not just passive passive subjects to the demands of reformers, both Protestant and Catholic, but engaged actively in the religious issues of the day. The changes which the Reformation brought about had a profound effect on the development of early modern women’s identities, agency and voices. Whilst today the balance is tipped towards looking at individual women’s written responses, and a focus on cultural more than social issues, we should be aware throughout, I think, of thinking about how such responses also extended into women’s everyday lives. So in thinking about these and many other issues I hope everyone enjoys today’s events and can come away with fresh perspectives as we seek to recover women’s words and experiences in an age of religious change.

Our first panel was on Prophecy. It was chaired by Professor Lyndal Roper, and featured Nicola Deboys (Lincoln College, Oxford) and Claire McGann (UCL). Nicola Deboys spoke about Ursula Jost and her printer, Margarethe Prüss. Jost received visions from God at the request of her husband, and Deboys contrasted this with medieval female prophets, who had visions involuntarily. Claire McGann’s title was ‘Recording women's responses to the Reformation: Henry Jessey as "relator" of Sarah Wight's religious prophecy in The Exceeding Riches of Grace (1647)’, and she drew attention to the idea of the female voice being edited, recorded and annotated by men.

This was followed by our first keynote speaker, Sara Smart, who spoke about the portrayal of dynastic women in Brandenburg’s second Reformation, during the rejection of Lutheranism and the turn towards Calvinism. This directly impacted the public characterisation of the electresses Elisabeth Charlotte and Luise Juliane.

The second panel, Women and Church Structures, was chaired by Edmund Wareham. Mette Ahlefeldt (St Catherine’s College, Oxford) spoke first, addressing churching as a disciplinary tool in early modern Denmark. She suggested that the practice would not have been such a powerful tool without the layers of meaning added by women themselves. The second speaker was Elizabeth Goodwin (University of Sheffield) who spoke about the textual resistance to the Reformation offered by female religious communities. She focused on the cases of the Caritas Pirckheimer, Abbess of St Clara’s in Nuremberg, and Elizabeth Cressner, prioress in Dartford.

During lunchtime there was an opportunity to view and handle some of the Reformation pamphlets held by the Taylorian. After lunch Edmund Wareham gave a brief introduction to the Taylorian's large collection of Reformation pamphlets. Duplicates from Heidelberg University, the majority were purchased by the library in the late nineteenth century. Many of the most important texts on women and the Reformation can be found in the collection, including Luther's sermon on marriage and treatises on leaving the convent. As the pamphlets form part of the library's teaching collection, participants enjoyed being able to handle the books themselves.

The afternoon began with the third panel, Noblewomen, which was chaired by Mary Boyle, another of the organisers. The first speaker was Marie Møller Christensen (University of Copenhagen) who explored the manuscript prayer books used by Danish noblewomen in the second half of the sixteenth century. Eight of these prayer books are still in existence, and have not been previously examined. Louise Horton (Birkbeck, University of London) spoke next, delving into the complex textual history of Lady Abergavenny’s prayers asking, ultimately, what and whose work we are reading when we read Lady Abergavenny’s prayers as they appear in Thomas Bentley’s Monument of Matrones. The final speaker of the panel was Ruth Gornandt (University of Oxford) who addressed Elisabeth of Brandenburg’s reintroduction of the Reformation into Lower Saxony. Elisabeth had become a Lutheran while her husband remained Catholic, and she had made plans to introduce the Reformation while he was still alive, secretly networking via letters.

This part of the day was concluded by our second keynote speaker, Ulrike Strasser, who broadened the focus of the day to consider gender more broadly, speaking on the topic 'Of Martyrs & Makhanas: Jesuits & Gender in the 17th Century Marianas Mission'. She argued that an analysis of culture, identity, and gender is key to understanding the Reformation.

We then moved to the Chapel at St Edmund Hall for the first ever English-language performance of scenes from the Juttenspiel, the fifteenth-century German play about Pope Joan which survives only in a 1565 Reformation print. About a third of the play was translated between February and May, as the result of a collaborative online project. This project will now move into its next phase, with the aim of translating the rest of the drama. The Chapel was full and the audience, which included experts, novices, and everything in between, were treated to a well-received dramatic reading of the sections translated thus far.

The papers at the workshop, as well as the evening performance, were recorded by another of the organisers, Charlotte Hartmann, and will appear online in due course, where we hope that the discussion will continue.

Women in the Humanities 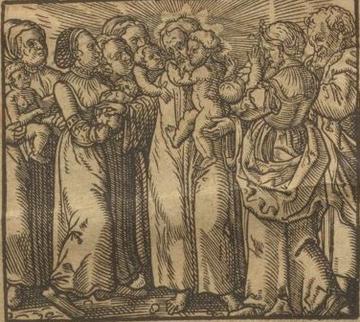