Women’s Spaces in Sound was a concert held on Monday 3 June 2019, under the auspices of the conference Women’s Spaces, Pleasure, and Desire in the Belle Époque, held at St Hilda’s College and co-convened by Dr Rhiannon Easterbrook, Sasha Rasmussen, and Mara Gold. The conference explored both physical and imagined spaces in which women interacted, publicly and privately, and the ways in which space could facilitate, represent, structure or supress women’s experiences of desire and pleasure at a particularly turbulent historical moment: fin de siècle and the onset of modernity.

The concert echoed many of these themes, but also provided a space in which the relationships and resonances between them could be elaborated in more abstract terms, extending the conversation to include a public audience. It is rare to see a concert programme composed entirely of works by women, and rarer still that this should be not a mere example of tokenism, but integral to the intellectual agenda of the programme. By engaging with feminine creativity in a more sustained and deliberate way, we sought to reinforce the themes of the conference: the Holywell Music Room became a space dedicated to women’s music and ideas; desire might manifest itself as determination; and we all took pleasure in the listening.

The programme of the concert was as follows:

Sarah Westwood – You Are Your Memory

The concert attempted to create a dialogue between three distinct temporalities: the Classical, the Belle Époque, and the present, weaving these together with themes of feminine desire, power, and pleasure. Westwood, Pascal, and White represented the present, and were all present for the performance of their works. Bright Knatchbull, Viardot, and Chaminade were all active in the Belle Époque, with their creative output spanning the late-nineteenth and early-twentieth centuries. Classical influences were also apparent, in the forms of the Dryad, Medea, and Sappho. The programme sought to trace a roughly symmetrical arc – beginning with abstract instrumental musings, before shifting towards vocal music, then the theatrical spoken word, returning once more to song and closing with the instrumental once more. This palindromic structure managed the drama of the evening, building to a shocking climax in Pascal’s reimagining of Medea’s betrayal of Glauke, then gradually calming to bid the audience farewell with the largo of Chaminade’s piano trio.

The concert began with Sarah Westwood’s evocative and atmospheric You Are Your Memory, a work which makes use of extended instrumental techniques to construct a pensive atmosphere. The work creates a sense both of longing and of physical space, through a reflection on the state of suspense and ambiguity associated with a long-distance relationship. Extracts from Dora Bright’s The Dryad – Tableau II, originally performed as a ballet with the collaboration of dancer Adeline Genée at the Empire music hall in Leicester square in 1908. Fragmentary, refracted and glittering, the piano reduction of the original provides a musical echo of an imagined dancer.

Three songs of Pauline Viardot introduced the female voice to the programme for the first time, articulating a world of interiority. This voice then multiplied, as a scene from Julia Pascal’s Blueprint Medea took us from monologue to dialogue, presenting an intimate and ambiguous glimpse of a relationship between two women, drawing tension from their conflicting loyalties and agendas. Cassandra White’s Songs of Sappho used a chorus of three female voices to explore love and desire between women, balancing lush vocal harmonies against the clarity and beauty of Sappho’s sparse texts. The evening closed with the more traditional genre of chamber music – two movements of Cécile Chaminade’s second piano trio in A minor – which despite its conventional form, nevertheless sparkles with originality and invention.

We would like to take this opportunity to once more express our profound gratitude to all the performers and creator, for their time given, their enthusiasm for the project and for creating sound out of silence: Thomas Carr, Sarah Westwood, Simon Upton, Aaron Hartnell-Booth, Sebastian Riedl, Margaret Frainier, Julia Pascal, Ruth D’Silva, Shaniaz Hama-Ali, Cassandra White, Bryony McIvor, Laura Coppinger, and Hannah Leighton-Jones. We also wish to thank TORCH for their generous support of both the concert, and the conference as a whole; and Wadham College Music Society, for generously hosting the event in the beautiful Holywell Music Room. 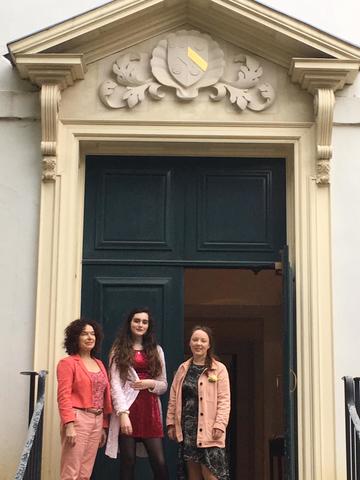