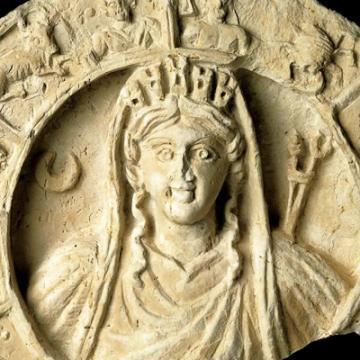 Khirbet et-Tannur was a religious sanctuary of the Nabataeans, ancient Arabs whose capital was the rose-red rock-cut city of Petra in Jordan. Excavated in 1937, the temple sculptures from Khirbet et-Tannur are in important public collections of the Jordan Museum, Amman, and the Cincinnati Art Museum. Nelson Glueck’s fascinating finds of cult offerings and equipment were buried deeply in the Harvard Semitic Museum until they were unearthed by scholars decades later in 2002. New research on those discoveries and the site’s sculpture by an international team of experts, led by Judith McKenzie (Oxford), has illuminated the religious practices and art of the Nabataeans. This “gem of a small Nabataean temple” has a fascinating story.

TORCH Knowledge Exchange Fellow, Marlena Whiting (Classics, now University of Amsterdam) was appointed in 2014/15 to explore the presentation of the site to the public (tourists and museum visitors) and school students, following the completion of research on it (published in two monographs in 2013). Like the research, this was a team effort. She was assisted by Hannah Wellman (University of Oregon) and Judith McKenzie. Groton School teacher, Andres Reyes, and current and former Groton students helped clarify the text for the interested reader unacquainted with the subject. It was type-set by Hanna Kim of Groton School Press and has been translated into Arabic by a Diana Sayegh (University of Massachusetts Lowell), originally from Aleppo. The English language version of the booklet was published in October 2016, with the support of a Public Engagement with Research Grant from Oxford’s TORCH, the Dillon Fund of Groton School, and the Semitic Museum, Harvard University.