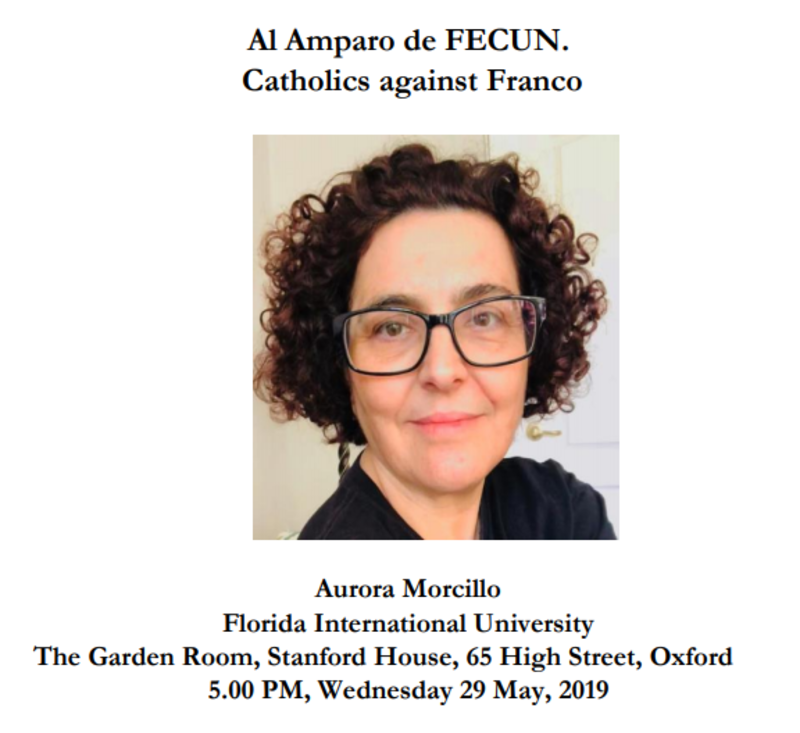 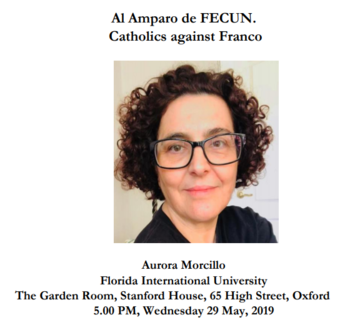 This paper is based in the oral histories of two members of FECUN, Arturo and Amparo. FECUN (Federación Española de Comunidades Universitarias), also known as “the Christians,” represented an alternative resistance to that of the clandestine Communist Party at the University of Granada. Forming a cohesive group, though heterogeneous in their religious fervor, FECUN’s tactics and strategies drew inspiration from the HOAC (Hermandad Obrera de Acción Católica or Catholic Action Workers Fraternity). The group explicitly distanced itself from the anti-Franco political opposition parties. Based on the oral histories of two members of FECUN, this paper revisits their experience of the repressive state apparatus deployed by the regime.

Dr Morcillo is a Professor of History at Florida International University in Miami, Florida. She is a cultural historian of modern Spain whose work crosses into the fields of cultural, memory and gender studies. Her research focuses on recent history and gender dynamics in the Spanish and Latin American context.  Gender relations reveal a textured history that runs through the formal institutions of church, political parties, the economy and schools. Aurora examined right-wing Catholic women’s groups in True Catholic Womanhood. Gender Ideology in Franco’s Spain, first published in 2000 by Northern Illinois University Press and issued in paperback in 2008. Gender relations also permeate the informal institutions of the media, movies, and advertisements. This was the subject of The Seduction of Modern Spain. The Female Body and the Francoist Body Politic, (2010). Aurora is currently working on a new publication provisionally entitled Things Visible And Invisible: Life Narratives in Late Francoism. This is an oral history project based on a collection of interviews of ordinary women (and men) who fought in the student movement at the University of Granada against Franco and working-class women who exercised acts of daily resistance against a totalitarian regime. This is, therefore, implicitly a feminist analysis of the transition of the Francoist regime to democracy as a result of the modernization in 1960s and 1970s wrought by urbanization and consumerism, emigration and tourism.