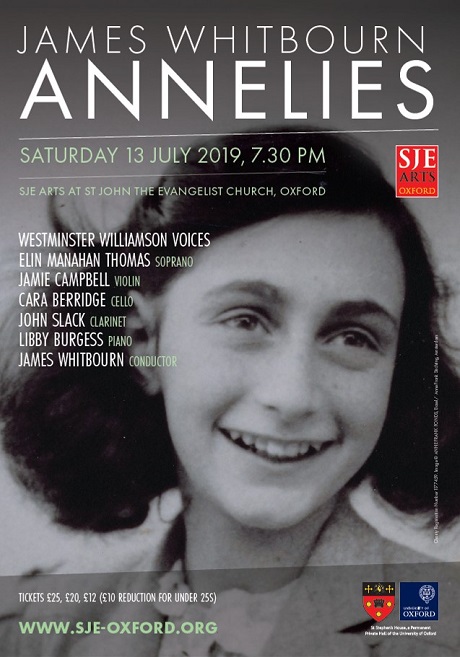 The Choral Setting of The Diary of Anne Frank

Annelies has been praised by critics worldwide as ‘music of great beauty’ (Gramophone) and as a work of ‘such tender respect it’s almost impossible to hear without tears’ (The Observer).

2019 marks the 90th anniversary of the birth of Anne Frank. James Whitbourn is the only composer to be granted permission to set the words of her extraordinary and brilliant diary entries within a full-length choral work. Annelies is now one of the most performed large-scale choral works and has received noted performances at New York’s Lincoln Center, Chicago’s Ravinia Festival, The Kennedy Center in Washington, Washington National Cathedral and many other venues in the USA, Canada, Israel, Germany, The Netherlands, Switzerland, Austria, Belgium, France, Australia and New Zealand and the UK.

The GRAMMY-nominated choir Westminster Williamson Voices combine under the direction of the composer with the renowned British soprano Elin Manahan Thomas, who sang to a worldwide audience earlier this year at the wedding of Prince Harry and Meghan Markle. The superb acoustic of SJE Arts Oxford is the perfect setting for this beautiful and poignant music.

Annelies will be the major performance within the 2019 Choral Institute at Oxford hosted by St Stephen’s House, Oxford, in collaboration with Westminster Choir College, USA.  The Williamson Voices, who Gramophonenoted ‘sing with a precision and finesse usually found in the best of the UK’s large chamber choirs’, are recognized as one of the world’s finest choral ensembles. In 2014 they were the only American choir to be nominated, with their conductor James Jordan, in the Best Choral Performance category of the 56th GRAMMY Awards. The Williamson Voices are the choir-in-residence of the Choral Institute at Oxford.