Art and its Histories in Contemporary Greece: Concepts, Challenges, Debates 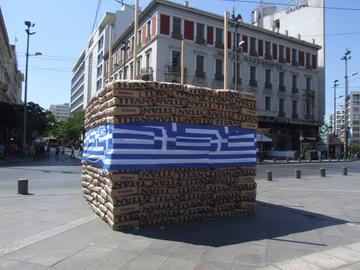 Art and its Histories in Contemporary Greece: Concepts, Challenges, Debates

Up until a few decades ago the humanities were conceived around canons of Western history, culture and thought spanning from ancient Greek antiquity to the present day. Eurocentrism structured disciplinary narratives and academic programs, and assigned
importance and value to the humanities since the latter legitimized a hierarchical organization of the world around nations, cultures, races, religions, genders, centers/peripheries and so on. As geopolitics change and the dominance of the West is
confronted with its impact on human and non-human ecosystems around the globe, a more symbiotic approach to diverse cultures, identities, beliefs and narratives in the plural is gaining ground in academia.

Amidst this rapidly shifting social, political, conceptual and epistemological framework, we want to revisit the workings of art and its histories seeing them as a timely, relevant field which has a part to play ‘in the cultural and social study of the
Greek world in the 21st century.’ How do processes of globalization in tandem with the specific historical and geopolitical position of Greece affect the production, display and theorization of art and artistic practices? In turn, how can we use art’s
products and histories to talk about Greece in the 21st century? And in what ways do fields such as anthropology, cultural analysis or economy intersect with contemporary art and art theory?

Convened and chaired by:

About the roundtable series:

Under the general title “Modern Greek Studies and Beyond: Local Cases, Global Debates”, the roundtable discussions will bring local case studies from Greek culture, society, history, and politics to bear on larger and timely theoretical, political, and
cultural debates: debates on ecocriticism, biopolitics and race, the relevance of contemporary (Greek) art, languages of futurity from the European and Global South, and COVID-19 as a transversal crisis.

We aim at inclusivity and diversity in speakers and audiences and at stimulating interdisciplinary dialogues that will take scholars outside the comfort zones of their disciplines. In each roundtable, invited speakers from different disciplines and career
stages will converse with each other, in order to promote exchanges among scholars who might normally not sit around the same academic table.

About the network: “Rethinking Modern Greek Studies in the 21st century: A Cultural Analysis Network” emerged from a partnership between the departments of Modern Greek at Oxford and Amsterdam but brings together scholars in several universities around
the world and aims to progressively widen its reach to include more partners and countries. Our inaugural conference in Oxford (January 31- February 1, 2020) was the first meeting place for the formation of a dynamic network of scholars that has been
growing ever since (a series of blogposts reflecting on the first meeting of the network are available here ).
Given the current restrictions that do not allow us to host face-to-face events, we will continue the network’s activities this academic year with this online roundtable series and – if the situation allows it – a 2-day conference in Amsterdam in
the fall of 2021.

Participation in the roundtables is free and open to all.

This event will be held online as a Zoom webinar. The event is free but registration is required.