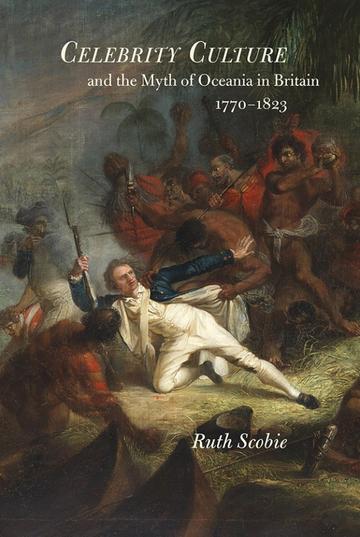 RESCHEDULED - Please be aware the date of this event has changed to the 6th December 2019. Please do get in touch with us here at TORCH if you have any queries.

Join us for the TORCH Book at Lunchtime event on Celebrity Culture and the Myth of Oceania: Britain 1770-1823 by Dr Ruth Scobie.
The event will begin with a free lunch at 12:30pm, with the discussion 1pm-2pm.

Register for your free place on Eventbrite here. If you would prefer not to use Eventbrite, please email torch@humanities.ox.ac.uk.

An intriguing case study on how popular images of Oceania, mediated through a developing culture of celebrity, contributed to the formation of British identity both domestically and as a nascent imperial power in the eighteenth century.

At the end of the eighteenth century metropolitan Britain was entranced by stories emanating from the furthest edge of its nascent empire. In the experience of eighteenth-century Britain, Oceania was both a real place, evidenced by the journals of adventurers
like Joseph Banks, the voyage books of Captain James Cook and the growing collection of artefacts and curiosities in the British Museum, and a realm of fantasy reflected in theatre, fashion and the new phenomenon of mass print.

In this innovative study Ruth Scobie shows how these multiple images of Oceania were filtered to a wider British public through the gradual emergence of a new idea of fame - commodified, commercial, scandalous - which bore in some respects a striking
resemblance to modern celebrity culture and which made figures such as Banks and Cook, Fletcher Christian and his fellow mutineers on Pitcairn Island into public icons. Bringing together literary texts, works of popular culture, visual art and theatrical
performance, Scobie argues that the idea of Oceania functioned variously as reflection, ideal and parody both in very local debates over the problems of contemporary fame and in wider considerations of national identity, race and empire.