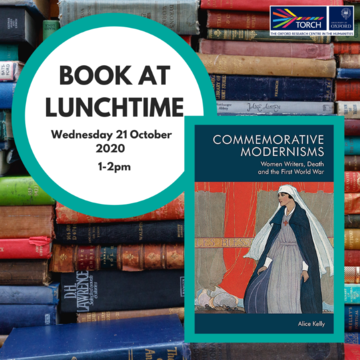 Join us for an online TORCH Book at Lunchtime webinar on Commemorative Modernisms: Women Writers, Death and the First World War written by Dr Alice Kelly.

One of the key questions of modern literature was the problem of what to do with the war dead. Through a series of case studies focusing on nurse narratives, Edith Wharton, Katherine Mansfield, H.D., and Virginia Woolf, as well as visual and material culture, Commemorative Modernisms: Women Writers, Death and the First World War provides the first sustained study of women’s literary representations of death and the culture of war commemoration that underlie British and American literary modernism. Considering previously neglected writing by women in the war zones and at home, as well as the marginalised writings of well-known modernist authors, and drawing on international archival research, this book demonstrates the intertwining of modernist, war, and memorial culture, and broadens the canon of war writing.

Author Alice Kelly is currently a Lecturer in American Literature at the University of Sussex, and the Communications Officer here at the Rothermere American Institute, University of Oxford. Her research focuses on twentieth-century literary and cultural history in Britain and America. As well as Commemorative Modernisms: Women Writers, Death and the First World War (2020), Alice has published a critical edition of Edith Wharton’s First World War reportage, Fighting France: From Dunkerque to Belfort (2015), and essays on modernist and First World War literature. She has held Fellowships at Yale University, New York University, and a British Academy Rising Stars Award for her interdisciplinary seminar series Cultures and Commemorations of War.

Michael Whitworth is a Professor of Modern Literature and Culture at the University of Oxford. He has published extensively on Virginia Woolf, with his most recent work being an edition of Virginia Woolf's Night and Day for Cambridge University Press (published 2018). His previous publications include Einstein’s Wake: Relativity, Metaphor, and Modernist Literature, and chapters on Oliver Lodge’s science writing and Hugh MacDiarmid’s poetry. He is currently working a project concerning on science, poetry, and specialization in the early twentieth century,

Laura Rattray is Reader in American Literature at the University of Glasgow and Director of its Centre for American Studies.  She has teaching and research interests in modern American literature and culture, women’s writing and gender, editing and publishing history. In 2016 she founded the Transatlantic Literary Women series, funded by the British Association for American Studies and US Embassy small grants programme. Publications include Twenty-First-Century Readings of Tender Is the Night (co-editor with William Blazek), The New Edith Wharton Studies (co-editor with Jennifer Haytock) and The Unpublished Writings of Edith Wharton, while her new monograph, Edith Wharton and Genre: Beyond Fiction, is published by Palgrave Macmillan.

J​ay Winter​ is the Charles J. Stille Professor of History Emeritus at Yale University. He is a specialist on World War I and its impact on the 20th century. Previously, Winter taught at Hebrew University of Jerusalem, the University of Warwick, the University of Cambridge, and Columbia University. In 2001, he joined the faculty of Yale. Winter is the author or co-author of 25 books, including ​Socialism and the Challenge of War; Ideas and Politics in Britain, 1912-18​; ​Sites of Memory, Sites of Mourning: The Great War in European Cultural History​; ​The Great War and the Shaping of the 20th Century;​ ​Rene Cassin and the rights of man​, and most recently, ​War beyond words: Languages of remembrance from the Great War to the present​.