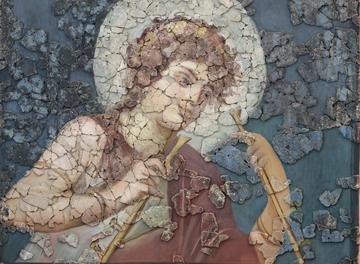 The (en)coding Heritage Seminar Series brings together researchers who are working at the cutting edge of digital technologies, humanities and heritage science. The first session in the series is devoted to Digital Reconstructions and Reactions.

‘Before ever the Flowers were Named’: Photogrammetry, Virtual Restoration and the Constantinian (“Fausta”) Ceiling Frescoes from 4th-Century Trier

This paper explores the role of photogrammetry, digital applications and virtual restoration of the 4th-Century Constantinian frescoes from Trier. Augusta Treverorum, ‘The City of Augustus among the (Celtic) Treveri’, was re-founded in honour of the Emperor Augustus c. 16-13 BCE. This study uses photogrammetry and digital approaches to alter both the plane and the viewer’s perspective. It resituates the frescoes within an interpretive framework better suited to the medium of Roman ceiling décor and offers high-definition for future conservation.

From Fragment to Floor: A Digital Reconstruction of the Chertsey Combat Series Tiles (English, c. 1250) and Their Lost Texts.

The thirteenth-century Chertsey tiles, held and displayed at the British Museum, rank among the most well-known and elaborate medieval floor tiles in England. Probably originally intended for the royal palace at Westminster under Henry III and Eleanor of Provence, the two-color inlaid Chertsey tiles displayed Latin texts surrounding images of combats, including that of Richard the Lionheart and Saladin. This project undertook a full digital reconstruction of the tiles as laid as a floor. Our current attempt to reconstruct this royal floor enables new and significant conclusions regarding the historical role of the floor, but also raises some issues which may be common to other digital projects.

Heritage as a Form of Digital Assemblage: An Analysis of a Cultural Heritage Lab

This paper analyses the lab series ‘Rethinking Heritage: A 3D Collage Workshop’, an exercise that critically explores and questions the techno-cultural politics behind what heritage is through an experimental investigation of the dichotomy of cultural and personal valued objects. The lab project demonstrates how the act of critical making can create spaces for active engagement which may influence the social construction of what constitutes a collective appreciation of objects.

Influencers, Reactions, and Rituals: Art "Stories" in a Pandemic Era

This paper explores some of the most striking strategies used by art institutions across the globe to adapt and reframe their practices in the midst of the COVID19 pandemic. It argues that imposing modes of configuring visual and historical narratives through canonical, hierarchical, excluding, and patriarchal systems of categorization not only remain intact but have increased due to the possibilities offered by the digital era.