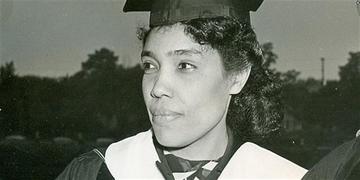 Merze Tate was a prolific expert on US diplomacy and in 1932, the first African-American woman to attend Oxford (she commented several times she was “the only colored American in the entire university, man or woman”), where she studied International Relations. She was also the first African-American woman to earn a doctorate in Government and International Relations from Harvard. In 1942 and 1948, she wrote two books on disarmament. Through her stints in several committees, Tate tried to tackle gender and racial discrimination in the academic system.

Cecelia Lynch is Professor of Political Science and International Studies at the University of California, Irvine. She specialises in international relations theory, religion, ethics, and social movements. She has written and edited a number of books and won the International Studies Association's J. Ann Tickner Award. She is also co-editor of the blog “Critical Investigations into Humanitarianism in Africa".