Ethics and the Future of AI 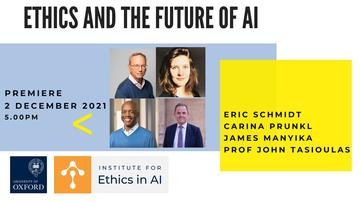 Ethics and the Future of AI

Ethics and the Future of AI - in conversation with Eric Schmidt, Carina Prunkl and James Manyika. Chaired by John Tasioulas, Director for the Institute for Ethics and AI. Filmed at St Edmund Hall, Oxford on 29 October 2021.

Watch the premiere here on Thursday 2 December at 5.00pm. 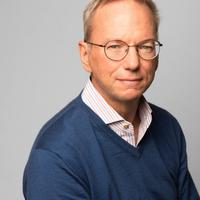 Eric Schmidt is a technologist, entrepreneur, and philanthropist. He joined Google in 2001, helping the company grow from a Silicon Valley startup to a global technological leader. He served as chief executive officer and chairman from 2001 to 2011, and as executive chairman and technical advisor thereafter. Under his leadership, Google dramatically scaled its infrastructure and diversified its product offerings while maintaining a culture of innovation.
In 2017, he co-founded Schmidt Futures, a philanthropic initiative that bets early on exceptional people making the world better. He serves as chair of The Broad Institute, and formerly served as chair of the National Security Commission on Artificial Intelligence. He is the host of Reimagine with Eric Schmidt, a podcast exploring how society can build a brighter future after the COVID-19 pandemic. 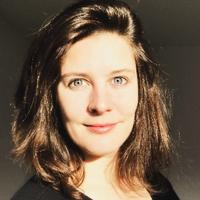 Dr Carina Prunkl is a Research Fellow at the Institute for Ethics in AI and an affiliate of the Centre for the Governance of AI at the Future of Humanity Institute. She works on the ethics and governance of AI with a focus on human autonomy, the ethics of autonomous systems, and responsible research and innovation. Dr Prunkl interacts with policy leaders across the globe to help develop solutions to current AI governance issues. At Oxford, she is currently teaching the class on Governance of AI for the EPSRC Centre for Doctoral Training in Autonomous and Intelligent Machines and Systems.

She holds a BSc and MSc in Physics from Freie Universität Berlin, an MSt in Philosophy of Physics and a DPhil in Philosophy from the University of Oxford. She previously worked as a Senior Research Scholar at the Future of Humanity Institute. 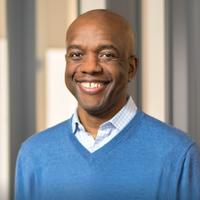 James Manyika was appointed by President Barack Obama to serve as vice chair of the Global Development Council at the White House and by two US Commerce Secretaries to the Digital Economy Board and to the National Innovation Board as part of the Competes Act. He serves on the board of the Council on Foreign Relations (CFR) and is a member of the Trilateral Commission. He has served on several national and international taskforces, most recently cochairing CFR’s taskforce on innovation and national security, and appointed by the governor to cochair the state of California’s future of work commission.

He is involved in research institutes including serving on the board of the Broad Institute of MIT and Harvard, and advisory boards at Oxford, MIT, LSE, and Stanford, including as a member of the steering committee for the 100-year study of AI, and at Harvard’s Hutchins Center for African and African American Research. He has been appointed a visiting professor at Oxford’s Blavatnik School of Government, and a member of the National Academies of Sciences, Engineering, and Medicine’s committee on responsible computing.

A Rhodes Scholar, James received a DPhil, MS, and MA from Oxford in AI and robotics, mathematics, and computer science, and a BS first class in electrical engineering from the University of Zimbabwe. He has been elected a fellow of the American Academy of Arts and Sciences, a distinguished fellow of Stanford’s AI Institute, a visiting fellow of All Souls, Oxford, a lifetime fellow of the Royal Society of Arts, and a research fellow of DeepMind.

James is on the boards of the Hewlett, MacArthur, and Markle philanthropic foundations and a trustee of the Aspen Institute. He was a nonresident senior fellow of the Brookings Institution in Economic Studies, a visiting scientist at NASA Jet Propulsion Labs, and a faculty exchange fellow at MIT. At Oxford, he was a member of the Programming Research Group and the Robotics Research Lab, and was awarded a research fellowship and elected a fellow of Balliol College.