Part of the Colloquium on AI Ethics series 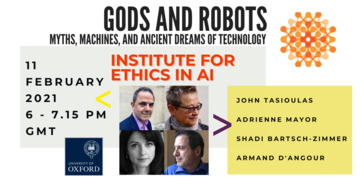 What, if anything, can the ancient Greeks teach us​ about robots and AI? Perhaps the answer is nothing, or nothing so straightforward as a correct 'solution' to the problems thrown up by robots and AI, but instead a way of thinking about them.  Join us for a fascinating presentation from Adrienne Mayor, Stanford University, who will discuss her latest book, Gods and Robots: Myths, Machines, and Ancient Dreams of Technology. This book investigates how the Greeks imagined automatons, replicants, and Artificial Intelligence in myths and later designed self-moving devices and robots. 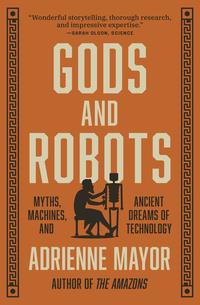 Adrienne Mayor, research scholar in the Classics Department and the History and Philosophy of Science program at Stanford University since 2006, is a folklorist and historian of ancient science who investigates natural knowledge contained in pre-scientific myths and oral traditions. Her research looks at ancient "folk science" precursors, alternatives, and parallels to modern scientific methods. She was a Berggruen Fellow at the Center for Advanced Study in the Behavioral Sciences, Stanford, 2018-2019. Mayor's latest book, Gods and Robots: Myths, Machines, and Ancient Dreams of Technology, investigates how the Greeks imagined automatons, replicants, and Artificial Intelligence in myths and later designed actual self-moving devices and robots. Mayor's 2014 book, The Amazons: Lives and Legends of Warrior Women across the Ancient World, analyzes the historical and archaeological evidence underlying myths and tales of warlike women (Sarasvati Prize for Women in Mythology). Her biography of King Mithradates VI of Pontus, The Poison King, won the Gold Medal for Biography, Independent Publishers' Book Award 2010, and was a 2009 National Book Award Finalist. Mayor’s other books include The First Fossil Hunters (rev. ed. 2011); Fossil Legends of the First Americans (2005); and Greek Fire, Poison Arrows, and Scorpion Bombs: Biological and Chemical Warfare in the Ancient World (2009, rev. ed. forthcoming).

Shadi Bartsch-Zimmer - Helen A. Regenstein Distinguished Service Professor of Classics and the Program in Gender Studies. Professor Bartsch-Zimmer works on Roman imperial literature, the history of rhetoric and philosophy, and on the reception of the western classical tradition in contemporary China.  She is the author of 5 books on the ancient novel, Neronian literature, political theatricality, and Stoic philosophy, the most recent of which is Persius: A Study in Food, Philosophy, and the Figural (Winner of the 2016 Goodwin Award of Merit).  She has also edited or co-edited 7 wide-ranging essay collections (two of them Cambridge Companions) and the “Seneca in Translation” series from the University of Chicago. Bartsch’s new translation of Vergil’s Aeneid is forthcoming from Random House in 2020; in the following year, she is publishing a new monograph on the contemporary Chinese reception of ancient Greek political philosophy.  Bartsch has been a Guggenheim fellow, edits the journal KNOW, and has held visiting scholar positions in St. Andrews, Taipei, and Rome. Starting in academic year 2015, she has led a university-wide initiative to explore the historical and social contexts in which knowledge is created, legitimized, and circulated.

Armand D'Angour is Professor of Classical Languages and Literature at the University of Oxford. Professor D'Angour pursued careers as a cellist and businessman before becoming a Tutor in Classics at Jesus College in 2000. In addition to my monograph The Greeks and the New (CUP 2011), he is the author of articles and chapters on the language, literature, psychology and culture of ancient Greece. In 2013-14 he was awarded a British Academy Fellowship to undertake research into ancient Greek music, and in 2017 was awarded a Vice Chancellor’s Prize for Public Engagement with Research. Professor D'Angour has since co-edited with Tom Phillips Music, Text, and Culture in Ancient Greece (OUP 2018), and in addition to numerous broadcasts on radio and television, a short film on Youtube (https://www.youtube.com/watch?v=4hOK7bU0S1Y) has reached over 650,000 views since its publication in December 2017. His  book Socrates in Love: The Making of a Philosopher was published in April 2019, and How to Innovate: An Ancient Guide to Creating Change is due from Princeton University Press in 2021.