I Fagiolini: Leonardo – Shaping the Invisible 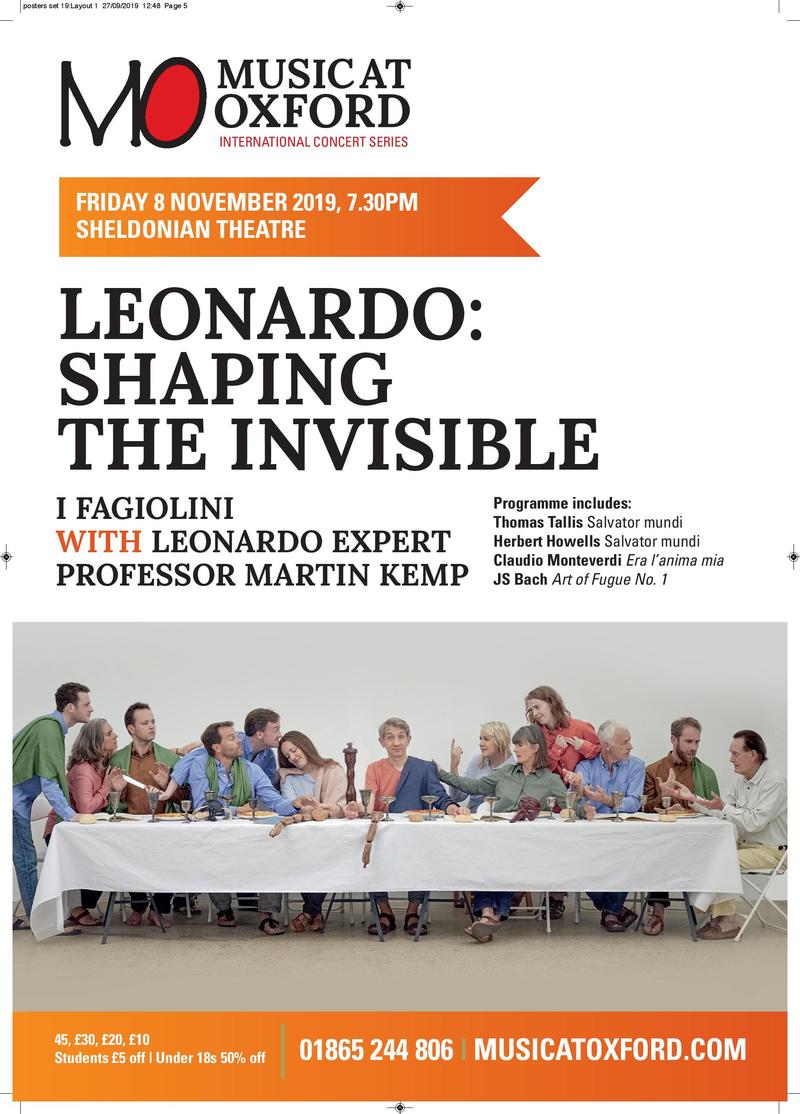 ainter, sculptor, architect, stage-designer, engineer (military, civil, hydraulic), designer of war machines, pioneer of flight, anatomist, biologist, geologist, physicist, mathematician – and musician! We call him the ‘universal man’, the ultimate polymath. But he would be better seen as a ‘monomath’, as bringing all facets of his activity under one central embrace - the rational laws of God’s creation. These laws were mathematical, and it is on this foundation that he revered music as the only serious rival for his divine ‘science’ of painting.

Leonardo was regarded as a fine musician, accompanying his improvised poetry on the lira da braccio: indeed his first major career move (as a diplomatic ‘gift’ from Lorenzo de’ Medici in Florence to the duke in Milan) may have been as much for his musical accomplishments as his pictorial skills. He is said to have carried with him to Milan an outlandish lira in the shape of a horse’s skull and his manuscripts contain many half-designs for novel instruments – but only a few scraps of melody survive.

In his polemic paragone (comparison of the arts), Leonardo claimed that hearing was a lesser sense than sight, and that music “perishes immediately after its creation”. However, he recognised that “harmonic intervals” in music “circumscribe the proportionality of the component parts ... no differently from the linear contours of the limbs from which human beauty is generated”: in other words music and the body’s proportions arise from the same mathematical ratios. He declared that he would found his art on optical rules of a mathematical kind - “just as the musician has done with notes”. So the mathematical harmonies underlying Creation are made visible by painting, and audible by music. As Leonardo said, music and painting are “sisters”.

Where does that leave today’s musician? Instead of the familiar ‘Music from Leonardo’s time’, we have been inspired by his perpetual curiosity to think creatively about music that might resonate with the state of mind that led to his inventions. We began with types of subject-matter shared by Renaissance art and music – the Salvator Mundi, the Annunciation and the Last Supper along with the secular subjects of beloved ladies, grotesque characters and war. But as the concert shows, we found connections on all sorts of levels, and in the end we offer you music as a prism through which to look at his art or – in the other direction – images to help you feel (as a way of understanding) the music. It’s a completely subjective ploy, presenting aural fantasia dei vinci (a name for his knot designs) in such a way that both sides of the brain may find pleasure.

The music will be accompanied by striking images of each painting and drawing, interspersed with brief commentaries linking the music to the art.