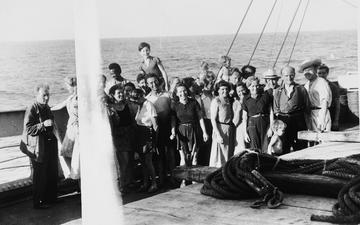 Hannah Arendt, Aimé Césaire, and Michael Rothberg have studied the relationship between the violence of colonialism and the violence of the Nazi genocide. This relationship becomes even more evident with an examination of the moments when refugees fleeing fascism in Europe encountered nationalist narratives, colonial structures, and racial hierarchies in specific locations of exile and transit. This paper centers on a particular place (Martinique)and two particular moments (in 1939 and in 1941) when refugees were detained on the Caribbean island. Those who had left behind a continent in flames were now confronted with the devastation that resulted from a long history of Eurocentrism and racism, and reacted to the connections between the horrors they were escaping and those they were witnessing in the Caribbean in different manners. Some openly acknowledged the links between respective histories of violence in Europe and in the Caribbean, while others were reluctant to do so.

In 1939 a mechanical failure of the “Ipanema,” a vessel that was taking Spanish refugees to Mexico, made a brief stay in Martinique necessary. Two years later, six vessels carrying roughly 3,000 women, men, and children deemed “undesirables” in France were traveling from Europe to the Americas via the Martinique route, an itinerary that was the outcome of a contradictory policy, a hybrid of rescue and expulsion (Jennings 2012). The “undesirables” included Jewish refugees, Spaniards loyal to the defeated Republic, antifascists and, among them, a number of intellectuals, artists, and writers whose work would forever be marked by the hospitality and also the hostility they encountered in Martinique. After a relatively brief, but arduous transit on the island, where insult to injury was added when the refugees were forced to cover the costs of their internment, themajority continued their journeys to the Americas.

A number of documents (by Silvia Mistral, Anna Seghers, Martin Ruppel, among others) depict the structures and hierarchies that refugees sometimes critiqued, sometimes ignored, and sometimes underscored. While the encounters between refugees and locals were relatively brief, these meetings had enduring consequences for the histories of art and world literature.