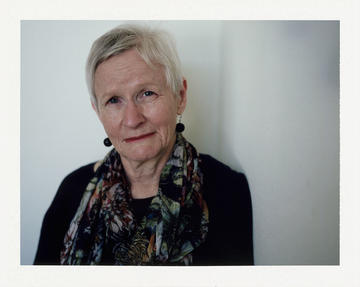 Internationally-renowned composer Anne Boyd will be in conversation with composer Thomas Metcalf, discussing her life and music ahead of a performance of her String Quartet No. 2 ’Play on the Water’ later this year as part of the TORCH project ‘Pixelating the River’: Engagement with Contemporary Music through Graphical Inputs, played by the Kreutzer Quartet, alongside a new work by Thomas Metcalf.

Professor Anne Boyd AM  is one of Australia’s most distinguished composers and music educators. Her undergraduate studies were in the Department of Music at the University of Sydney, where Peter Sculthorpe was her earliest and most influential composition teacher.

The hallmarks of her musical style are its transparency, gentleness and delicacy, attributes which reflect her long involvement with Asian traditions, especially those of Japan and Indonesia.

Two solo CDs of her music are Meditations on a Chinese Character (ABC Classics, 1997) and Crossing a Bridge of Dreams (Tall Poppies, 2000).

Professor Boyd was honoured with an AM in the Order of Australia in 1996, an Honorary Doctorate from the University of York in 2003, the Distinguished Services to Australian Music Award at the APRA-AMC Classical Music Awards in 2005 and the 2014 Sir Bernard Heinz Award for service to music in Australia.

Thomas Metcalf is a composer and DPhil candidate in Music at Oxford University (Worcester College), where he is researching the transformation of graphical spaces into determinately–notated music – focusing on a range of composers in the 20th and 21st centuries. His research has been recognised in the UK and internationally, appearing in peer-reviewed journals as well as diverse conference settings in Europe.

Beginning his composition training with Robert Saxton at Oxford in October 2014, Thomas subsequently achieved a first–class BA in Music and an MSt in Composition with distinction as the Ogilvie–Thompson Scholar of Worcester College. Since January 2020, Thomas has studied with Kenneth Hesketh, focusing specifically on graphical methods of determinate composition, a process that is present in much of Hesketh’s recent work.

Thomas’s works have been performed by a variety of ensembles, such as the ANIMA Collective, BBC Singers, Christ Church Cathedral Choir, GBSR Duo, Oxford Philharmonic, St. Pancras Parish Church Choir, and the Villiers Quartet. He has worked with composers such as Judith Weir, Michael Zev Gordon, Henning Kraggerud, and Dario Marianelli. He has also collaborated with festivals such as Oxford Lieder Festival (2018), Oxford Chamber Music Festival (2019), and the Vale of Glamorgan Festival (as part of the Peter Reynolds Composers Studio) (2020).

You can read more about Thomas's work by visiting: 'Pixelating the River: engagement with contemporary music through graphical inputs

You can find out more about Anne Boyd by visiting https://www.fabermusic.com/we-represent/anne-boyd.