Is There a Modern Indian Literature? 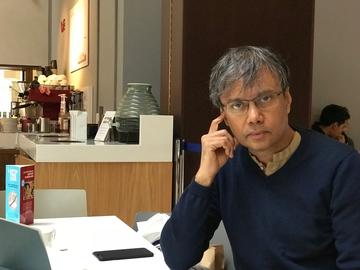 A 12 week course offered by the renowned novelist and critic Amit Chaudhuri. A collaboration between the Centre for the Creative and the Critical (CCC) at Ashoka University and The Oxford Research Centre for the Humanities (TORCH).

Registration is now closed. The start date of this course has been postponed until January 27th.

Please note: Ashoka University students who wish to attend in person or online will need to sign up for the class in the usual way, using the Ashoka Management System, unless they wish only to audit the class and not receive credits.

The CCC, as Chaudhuri has said, "is meant to create a space for thinking about creative practice and critical concepts in a way that is no longer addressed by institutional and academic writing or by the language adopted by publishers, festivals, or the media. In other words, it arises from a genuine desire to depart from the way literature and creativity are discussed in the academy and in the public sphere."

Amit Chaudhuri is a novelist, poet, critic, and musician. The Guardian called him "one of his generation's best writers"; Hilary Mantel, in the New York Review of Books, said that "Chaudhuri has, like Proust, perfected the art of the moment." He has written seven novels, the latest of which is Friend of My Youth. Among the many awards he has won for his fiction are the Commonwealth Writers' Prize, the Los Angeles Times Book Prize, and the Indian government's Sahitya Akademi Award. He has published a critical study on D. H. Lawrence's poetry, called a "pathbreaking work" by Terry Eagleton in the London Review of Books, three collections of critical essays, three collections of poetry, and a book of short stories.

Is There a Modern Indian Literature?

The question in the course title is one I asked myself as I began putting together an anthology in the late 1990s. How was one to conceive of a tradition called "Indian literature?" Was it the total of the various literatures of India? Or was there another way of exploring this category? It was a time when the Indian novel in English and the idea of "postcolonial literature" had begun to dominate. How did modernist and avant garde trajectories of literatures in the Indian languages fit into these relatively recent categorisations? One of my own reasons for rethinking and enlarging the frame had to do with my affinities with modernism as a reader and writer, affinities that seemed out of place post-Midnight's Children, but not so out of place within the experimental histories of modern Indian literatures themselves. The use of the word "modern" was, and is, deliberate, to point to developments that the term "postcolonial" doesn't address.

The texts we'll read here would follow, without too much narrow systematising, "Indian literature" and how its emergence from the late nineteenth-century in various languages embodied the trajectory of modernity, modernism, the avant garde, and formal preoccupations in India. The course means to question the largely theme-driven, Anglophone parameters of the "postcolonial" that have been with us for some decades now. It is also an attempt to address "decolonisation" not through corrective measures alone, but by rethinking literary history and practice.

The first class is scheduled for 20 January 2022, from 4.30pm to 7.30pm Indian Standard Time (11am to 2pm GMT). Each class will be a mix of Chaudhuri's reflections on a particular text, which will be circulated in advance, and discussion and presentations. The class will be a "hybrid" one, taking place in-person for Ashoka students (subject to change) at Ashoka University, and with students from Oxford and beyond participating online. All, including students from other universities, are welcome to register and participate in the course online - but will not be able to attend in person. Online participants will be encouraged to contribute to the discussion. Students will need to sign up for the whole course, which will take place over twelve weeks, not counting the mid-term break, when there will be no class. Classes will run at the same time each week until 14 April 2022.

1. Looking at the possible beginnings of modernism, in India and in literature in general: Tagore's essay on Bengali children's rhymes (1894) and 'Literature' (1889), from Selected Writings on Literature and Language in the Oxford Tagore Translation series; and Michael Madhusudan Dutt's letters (written to a friend in 1860) from the Picador anthology. Both the essay and the letters capture shifts in thought, unprecedented anywhere, with regard to consciousness, linearity, tradition, and their relationship to a relatively new category: the "literary."

2. I'm going to look at the title of the course, "Is There a Modern Indian Literature?", focussing on the last three words individually. I will also discuss why I opt for "modern" rather than "postcolonial" as a point of entry.

Four essays to look at here to do with debates on categories like "poetry," "literature," "Indian," and the "mother tongue," and with creating a critical vocabulary at different points of time .These are 'A Popular Literature for Bengal' (1870), 'A Review of Modern Bengali Literature' (1948), 'The Emperor Has No Clothes' (1982) by Arvind Krishna Mehrotra, and 'Is There an Indian Way of Thinking?' (1989) by A.K. Ramanujan. They are all in the Picador anthology.

Note that Ramanujan's essay, whose title the title of my course unintentionally echoes, scrutinises its own title closely.

3. Continuing the enquiry into the provenances of the modern, we'll look at a few instances of what precedes and predates the break that leads to modernism. Two essays to consult here: the third chapter, ‘Reading Iswarchandra Gupta’ in Rosinka Chaudhuri's The Literary Thing (the first three sections in particular, including “What is a Poet?”); and my essay 'The Accidental Tagore' from The Origins of Dislike.

We'll also look at some poems by Ishwar Gupta - the 1852 poem 'English New Year' or 'Ingrāji Nababarsha' for instance, a description of New Year's Day in Calcutta - and an extract from Kaliprasanna Singha's anarchic 1860 prose record of Calcutta, 'Hutom Pyachar Naksha', to get a sense of literary practice in the city before the advent, from 1861 onwards, of "high cultural" modernism.These works also give us a sense of the modern as something that already can't be contained or entirely defined by the colonial.

4. Chapter 27 from the Bengali novel Pather Panchali by Bibhutibhushan Banerjee, first published in 1929 after being serialised in a periodical. It's more or less contemporaneous with Woolf's To the Lighthouse, and is key to understanding the changes that were taking place in the 1920s to make consciousness, rather than narrative, the subject of the novel as a form.

We'll also be reading Premchand's Hindi short story 'The Chess Players' (1924) to see how fiction often looks at history askance, rather than frontally.

Both the novel and the story were made into films by Satyajit Ray.

6. The fairy tale and the hint of the supernatural: Manto's Urdu stories 'Peerun' (1950) and 'The Black Shalwar' (1942) and Nirmal Verma's Hindi story 'Terminal' (1992). These narratives remind us that there's a dimension of the uncanny in the Indian response to modernity that's largely unavailable to European modernism (though Surrealism does make an attempt to address it). They also show us how the "fairy tale" (for the lack of a better term) can open up onto the profound, without the sentimentality we associate with the popular culture of the time, or the self-consciousness of postmodernism.

Alongside these stories, we should also read Susan Sontag's essay, 'Under the Sign of Saturn' (1980): an example of how a critical reflection might incorporate, productively, a sense of predestination.

8. Arun Kolatkar's poetry: Jejuri, his 1976 poem-sequence about a visit to a pilgrimage town of the same name in Maharashtra - a work that reminds us, with various texts cited above, of the place of flânerie in modernity. And a selection of his English versions, from the 1950s, of Marathi mystical poets, whom he "translates" into an American dialect that's partly Hollywood noir and partly Beat poetry.

Postcolonialism gives us a relatively restricted and one-dimensional account of the way humour operates in literature (as does the Anglo-American convention of seeing "humour" as a separate genre, and a lesser one). Assertions like "writing back to the Empire" have also been part of a moral position, where the focus moves away from the creativity and playfulness of the text towards the fulfilment of what soon became a requirement - "writing back."

10. Junichiro Tanizaki's 'Portrait of Shunkin'; Fernando Pessoa, specifically 'The Keeper of Sheep' (1914) by his "heteronym" Alberto Caeiro, and 'The Tobacconist' by his heteronym Álvaro de Campos (an urban poet, in comparison to the mystical pastorist Caeiro).

We'll read these alongside A K Ramanujan's essay 'Three Hundred Ramayanas' in order to explore an aesthetic that counters the dominant Western viewpoint that holds parody to be deflationary and pastiche (according to Fredric Jameson), a characteristic of the emptiness of postmodernism. We'll consider these texts in the contexts of fullness and homage.

As no literary tradition exists outside of practice and debates in other genres, the last three classes will look at some positions argued for and explored across the arts in the time of the modern.

11. We'll look at the opening of Partha Mitter's The Triumph of Modernism, and his dating (which we may or may not agree with), of the Indian artistic avant garde to the Bauhaus exhibition,  arranged by Tagore and Stella Kramrisch, in Calcutta in 1922.

We'll also read essays by Nissim Ezekiel and by Adil Jussawalla on the artist Bhupen Khakhar, the first a pioneering acknowledgement of the way kitsch can energise a work of art, the second -  pioneering too - a reading of Khakhar's homoeroticism. These essays are also important as reminders of the importance that the art scene in the 1960s had for Anglophone Indian poets in Bombay.

Finally, we'll read three essays by Amrita Sher-Gil - 'Modern Indian Art' (1936); 'Amrita Sher-Gil: The Talented Artist (Written by Herself)' (1937); and 'Indian Art Today' (1941) - important because they record the way Indian painters turned away from what they called "academic art": this was a modernist rejection of the Renaissance painting and of neoclassical art without abandoning (in contrast to European artists, say), the human figure.

12. We'll watch Satyajit Ray's Aranyer Din Ratri (Days and Nights in the Forest), a film about a holiday - a trip taken by four friends who live in Calcutta who travel to a Santhali village to spend time in a forest officer's bungalow. We'll place this in the context of some of our earlier readings in week 5 - Tagore's 'The Postmaster', Ananthamurthy's 'A Horse for the Sun', and Ambai's 'Gifts' - to explore how journeys, middle-class displacement, inner exile, and sensory longing created a narrative of the modern in India.

This film, which also partly frames an encounter with Santhali tribespeople, will give us an opportunity to read 'Grasshopper versus Horse for the Sun' (1992) by D. R. Nagaraj, at once a record of a journey on foot into a "backward-caste" village in Karnataka and a meditation on Anantha Murthy's story. As Nagaraj's essay is about the limits of activist thought in relation to  the liberations of poetic language, our reading this week would also include the Dalit poet Namdeo Dhasal's essay 'Namdeo on Namdeo'. And, as we're studying, here, how limits might be critiqued by literary thinking, we'll have a look at the essay Tagore wrote shortly before his death, 'Historicality in Literature' - again, an argument against the sociological and an assertion on behalf of poetic language.

We'll take these detours without losing sight, hopefully, of the poetry and historicality of Ray's film, and see if a conversation might emerge from our viewing and our readings.

13. In the final class, we'll listen to Indian music - North Indian classical music; a Tagore song; two left-wing compositions written for the Indian People's Theatre Association by Salil Chowdhury; two Hindi film songs - as being an experiment on various fronts (comprising borrowings and rethinking composition in a way that neither imitates the West nor denies it), made possible by the unpredictable moods and milieus of modernity.