Part of the Humanities Cultural Programme, one of the founding stones for the  future Stephen A. Schwarzman Centre for the Humanities. 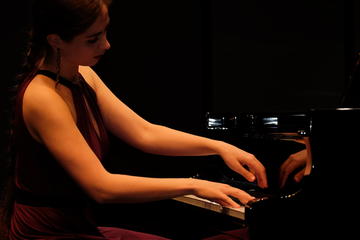 This event is free but booking is essential. To book tickets please click here.

The hour-long concert will comprise of an exploration of a symbiosis between traditional Zimbabwean music and Western Classical music, the respective 'native' spaces of the musicians who aim to find common grounds and new sound worlds through their collaboration. To book tickets please click here.

John Pfumojena (John Falsetto) is a Zimbabwean Music Composer, Theatre Director/Practitioner and Actor/Musician who is published by Warner Chappell Music (Warner Music Group). His Discography includes the collaborative album ‘Sounds Of Refuge’ with Sudanese musician Mohamed Sarrar (Executive Production by Good Chance Theatre). John is a co-writer and performer on Sunny Jain’s album ‘Phoenix Rise’. As a composer and music director, he has worked on the critically acclaimed play ‘The Jungle’ by Good Chance Theatre and created a multi-disciplinary show called ‘BUNKER OF ZION’, which is scored entirely by Zimbabwean Marimba and Mbira and co-produced with The Collaborative Touring Network. He received the OBIE Special Citation Award (NYC) for his work on ‘The Jungle’ play, and the Broadway World San Francisco Award for ‘Best Featured Actor in a Play’ for the same production. The Zimbabwe Achievers’ Awards (UK) also presented John with an Honorary ‘Cultural Ambassador’ Award.

John has worked in productions at the Young Vic, the Old Vic, Shakespeare’s Globe, St Annes Warehouse (NYC), the Playhouse West End, and The Curran in San Francisco amongst others. John’s practice is concerned with devising performances and training that integrate traditional Zimbabwean and Shona Mbira/culture for the modern age and audience. The commitment to new, collaborative techniques of working with traditional Zimbabwean instruments and music feature in his workshops and lectures at the London Academy of Music and Dramatic Arts (LAMDA) and Guildhall School of Music and Drama.

Judith Valerie Engel is an Austrian concert pianist and musicologist. She is currently pursuing a DPhil in Historical Musicology at the University of Oxford. She is the recipient of the Stone-Mallabar Music Doctoral Studentship in association with Christ Church. Engel started studying the piano at the age of five. From the age of 17 onwards, after graduating high school a year early, renowned pianist and pedagogue Prof. Pavel Gililov was her teacher. Under his supervision she completed her Bachelor’s and Master’s degree with highest distinction at the Mozarteum Salzburg, where she was also a recipient of the university’s merit-based scholarship. Before coming to Oxford, Engel was pursuing graduate studies at UBC in Vancouver, in the piano studio of Dr. Terence Dawson, winning multiple academic awards and scholarships. She has trained under several distinguished maestros, and performed in venues across Europe.