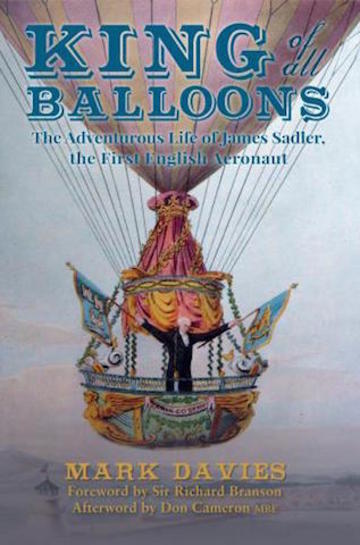 You are cordially invited to attend the launch of Mark Davies' biography of James Sadler (1753–1828), Oxford pastry cook and first English aeronaut. The book is a long-overdue biography of an inventive and courageous man, who overcame the constraints of his early life to become a pioneer of aviation, an engineer, gun-designer, naval chemist, and innovator.

James Sadler and his son Windham (1796–1824) staged ascents from some 40 towns and cities in the British Isles. Half of these constituted the first ascents ever seen at those places, including his very first of all in Oxford in 1784 (and indeed one at Cambridge: a unique 'double first'!). It was in 1810, on his return to ballooning after a 25-year break, that James was dubbed ‘King of all Balloons’.

The Sadlers also enabled the first ever flight by any English woman and that of the first woman to ascend in Ireland. The little-discussed subject of these and other intrepid female pioneers constitutes a substantial sub-text to the main theme.

Described by contemporaries as a 'true philosophical genius' and a 'perfect prodigy in mechanics', but also as a man who could ‘hardly speak a word of Grammar’, Sadler was known to the most prominent figures in Georgian society over a period of 40 years. Yet this ‘most ingenious, but unfortunate man’ ended his days back in Oxford in impoverished obscurity.

The venue of St Edmund Hall lies opposite the Sadlers’ former home and shop in Oxford’s High Street, and includes the former church of St Peter-in-the-East, where James Sadler was baptised and buried, along with several generations of ancestors.

Refreshments provided. Please arrive promptly to hear an introduction by a representative of the Royal Aeronautical Society, followed by Mark’s short illustrated talk, plus time for questions. Signed copies of the book will be available, published by Amberley Publications in Stroud, at a discounted price.

Thanks are due to St Edmund Hall, for its generosity in hosting this event, and to TORCH and Sanders of Oxford, antique print and map dealers ( based at the Sadlers’ nearby former retail premises) for providing the refreshments.

For further information and to register for this event, visit the Event Page.